We Didn’t Run Out of Stones

A speaker at a recent presentation on climate change uttered a profound statement that has stuck with me for its simple, but blunt reminder. It applies to not only the survival of our planet but also to how we address the many challenges in front of us.

In his concluding remarks, the spokesman said, “We didn’t leave the Stone Age because we ran out of stone; we found a better way to do things.”

We didn’t leave the Stone Age because we ran out of stones. We found a better way to do things.

We end another year staring at a world that appears to be turned upside down. Climate change, terrorism (domestic and international), war, hatred, violence, the list seems almost endless. We appear to be stuck in the Stone Age of forgetfulness. There are other options and “better ways” to work ourselves out of the messes that confronts us as we start 2016.

It’s not that we haven’t had prophetic voices urge us to embrace “better ways”.

Rev. Dr. Martin Luther King, Jr.: “We must learn to live together as brothers or perish together as fools.”

John Muir: “When we try to pick out anything by itself, we find it hitched to everything else in the universe.”

Marvin Gaye: “War is not the answer, for only love can conquer hate”

Parker J. Palmer: “Let’s not forget that American democracy started with ‘We the People’ agreeing to work hard to create ‘a more perfect union.’ We’ve lost the idea that politics begins at home with what happens in families, in neighborhoods, in classrooms, in congregations. We called this democracy into being – and if we want to call this democracy back to its highest values, it’s got to be us doing that calling. That’s not going to happen if ‘We the People’ don’t know how to talk to one another with civility and hold our differences in a creative, life-giving way.”

Mike McCabe: “Problems come and go, and issues appear to morph over time. But they don’t really change very much at all. At the root of them all are the same human failings. Selfishness. Greed. Fear. Hatred. These need to be replaced by a sense of common good and shared purpose. And an enlightened understanding of self interest that leads us to see that we are all in this together and inspires us to think we first instead of me first.”

John Dear: “My thinking of nonviolence after 30 years is that it’s a spirituality not just a methodology. It comes from a vision that sees every human being as your sister and brother. That’s the key to the whole thing. That we’re all one and we are already reconciled. Once we enter the truth of our common unity, then we realize we can never hurt anyone again or be silent when 30 wars are raging, people are starving, nuclear weapons are poised to strike or global warming is threatening our sisters and brothers.”

George Marshall: “If man does find the solution for world peace it will be the most revolutionary reversal of his record we have ever known. Military power wins battles, but spiritual power wins wars.”

We need to be active – DO SOMETHING. We have to stop the paralysis that grips our ability to march, to call, to vote, to talk….all ACTIVE verbs, not passive verbs. Action is what will bring us out of the Stone Age that threatens our humanity and our souls. 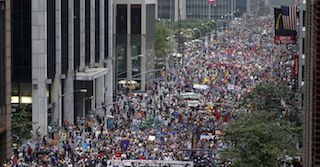 Nothing changes if nothing changes. We all need to DO SOMETHING to change the paralysis gripping our country.

We here at Wisdom Voices Press urge you to commit to a “better way” to face the challenges that await us in 2016. The Stone Age of hate and destruction that embraces us today demands that we do just that. Vote. Find 5 others to take to the polls who didn’t vote in 2014. Demand accountability from politicians. Talk to people (not in 140 characters but with your voice). March. Show Up. Demand No More War. Do Something!

Or as Diarmuid O’Murchu, one of our favorite authors and prophets of today, said in his book, Ancestral Grace: Meeting God In Our Human Story:

“We humans may make it through, but it will require a kind of rescue that creation in its planetary or cosmic dimensions can….make possible. And for that rescue to be possible, we must make radical adjustments in our lifestyles. Grace itself invites and empowers us to make the quantum leap, as Elizabeth Dreyer vividly reminds us: ‘Grace demands that one live the very life one is living, but in a new key that is more free, responsible, and open to the transforming love of god. Working to change unjust social and political structures is at the heart of such a life.’

“…Equipped with this ancient wisdom and the miracle of ancestral grace that defies all rationality, we stand a better chance of engaging the urgency our times require of us. We need to become much more real, live in the present, and abandon the patriarchal power games that no longer serve us well. The time is over for playing imperial games with either ourselves or our earth…Perhaps the crucial question is not whether we will make it through, but whether we can muster afresh the outrageous hope we have known so often throughout our long evolutionary journey and allow it to transform us once more in the amazing power of ancestral grace.”

Let’s leave the Stone Age behind and shape a “better way” forward.

This entry was posted in Democracy, Environmental, Social Justice, Thoughts on Life. Bookmark the permalink.