Wendell Potter seems to be just about everywhere these days. And we are all better off because of that fact.

For anyone paying attention to the discussions surrounding the implementation of the Affordable Care Act (ACA), you may have heard Potter speaking on national and regional radio shows or writing for multiple blogs. Check out his blog from earlier this month entitled: Reality Check on the Affordable Care Act. His goal is simple: beat back the misinformation disseminated by those who want to see the ACA fail. Under the best of circumstances, understanding the ACA can be difficult. Add to it the misinformation and threat of a government shutdown over its implementation and the problem intensifies. Into that backdrop of deliberate confusion and misinformation steps Wendell Potter: the voice of reason, calm, and intelligence, speaking truth to the power that is this country’s for-profit health care delivery system.

Wendell Potter: “If you don’t know what’s in the Affordable Care Act, try to educate yourself.”

Potter, a former public relations executive with CIGNA, reached deep within his soul about five years ago after a life-changing event and became determined his legacy would carry far more than the words “retired health insurance executive.” Few have understood—or participated first hand—in the intentional deceit by the health insurance companies of how the for-profit health care system functions, as has Potter. Potter is also an example of a dying piece of the American corporate world—an executive with a conscience who understands that greed and profit are barriers to health care access for millions of Americans. His words are so powerful because he knows helping people is what really matters in life. No screaming from a pulpit, no finger-pointing in anyone’s face. Rather a calm resolve that comes only from deep inner strength. He remains a beacon of hope that we as a country and as a people may once again “turn our hearts” to something of value.

We were honored to have talked with Potter in June 2012. As we approach October 2013, when the ACA health exchanges “go live”, we believe Potter’s words are as relevant today as they were a year ago. It is our pleasure to reprint our interview with him from 2012.  For more of the facts of who Wendell Potter is, we invite you visit his web site. Our goal is to provide more of the “why” Wendell Potter pursues the tireless and thankless job of trying to make health care work for people and not corporations. In the truest tradition of providing today’s “wisdom voices”, we present Wendell Potter—in his own words.

On why he decided to have a change of heart/soul on what he was called to do with his professional life:

“I think a lot had to do with the fact that I was born to a working class family in the southern Appalachians. I was fortunate enough to get a good education and I wanted to be a journalist. I was trained to be someone who wanted to try to write in ways that revealed truth and provided people with information that would help them understand things better. I think had it not been for that, I probably would not have done what I ultimately did.

“I left my journalism career and got into public relations more than 35 years ago, and I ultimately wound up in the health insurance industry. I had a very successful PR career, but I still had that training as a journalist and I still knew where I came from.

“I went back to visit my family in Tennessee 5 years ago and I read about something called the Health Care Expedition that was being held not too far from where I grew up. I had never heard of anything like this before. There were articles that people would be traveling from hundreds of miles away—from Ohio, South Carolina, Georgia. It was being held at the Wise County (Virginia) Fair Grounds. So I was very curious and decided to go check it out. When I got there I saw something I never expected to see

“I saw people lined up by the thousands at this three-day event trying to get care that was being provided free. That morning, people were soaking wet because it had been raining. They were lined up to get care that was being provided in barns, and then it hit me. I realized that those people could have been my neighbors, people I had grown up with, people I had shared cultural roots with. I realized that what I was doing for a living, in some way, was making it necessary for those people to have to resort to those lengths in order to receive care.

“I made a commitment that day that I would figure out some other way to make a living and ultimately did. That was an eye opener for me. Had I not been from that region, had I not gone back home at that time, had I not been curious enough to check it (the health exposition) out. There were many things that impacted me. It was a reminder as I began to think more of my life. I realized that what I was doing was in many ways the opposite of what I was trying to do in my first career (journalism). Then, I was trying to educate and enlighten and inform people. Now, more often than not, I was trying to obscure and misdirect the truth. I became so utterly ashamed of what I had become that I ultimately walked away from that job a few months later.”

On why others within the industry chose not to follow Potter’s path:

“It’s been a blessing. I don’t make near as much money, but I can’t think of any measure in which this has not been a blessing. I’ve met some of the most wonderful people since I’ve been away from that industry and have had experiences I would never have had. I’ve been stretched in ways I couldn’t imagine. I was never one who wanted to speak in front of an audience or to go in front of a camera. But I’ve overcome that. It was necessary if I was going to be doing what I was going to be doing. I had to walk through my fears.

“I keep a gratitude journal and that is so helpful for me to have reminders of just how much joy I have in my life. That keeps me centered. I’m just so grateful to be doing what I’m doing. As I was contemplating making this decision, I was thinking about my own legacy – what I would want my legacy to be when I’m no longer on this earth. I realized that I sure didn’t want it to be ‘a retired insurance company executive’. I knew that I had some things that I thought I could and should do, that if I didn’t do, I would regret on my death bed.”

On what keeps him hopeful:

“You have to look at this fight and know that we’re in for the long haul and we can’t expect instant gratification. We have to know that it takes time for significant change particularly when you’re fighting entrenched special interests. It took a long time to get the Civil Rights Act passed, to get Medicare passed. But, on the other hand, we’re seeing things today that may be able to be changed more rapidly than they have been in the past. That doesn’t mean that it’s going to be an easy slog to get to universal coverage, because it’s not. It’s going to take time. But it’s a possibility and unless we keep the faith, keep going despite discouragement, then the other side wins.”

On (his book) Deadly Spin:

“I call it ‘invisible persuasion’ and I’m hoping the book sheds some light on this and makes it more visible to people so they know how it’s done and how corporate spin has shaped the health care debate. 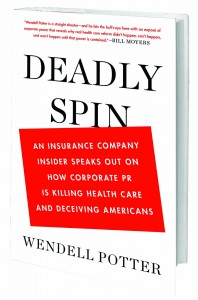 “In the book, I try to give people tools how to be wise to manipulation and what to look out for. People should know that most of the advertising being done (to discourage health care reform) and the organizations that are sponsoring them are in many cases just front groups for the insurance industry. It’s been estimated that $250M has been spent trying to discredit the health care law. When you get that kind of spending, it’s no wonder people don’t know what’s in the law. This is done purposely. In this book, I try to explain why that happens and where that money comes from and how all of us are susceptible to this type of persuasion.”

For information on how to order the book, click here.

On his advice to the public:

“Be skeptical about what you hear. Know that almost everyone you hear expressing a point of view has an agenda. Don’t outsource your thinking to TV commentators. Take the time to try and educate yourself.

“If you don’t know what’s in the Affordable Care Act, try to educate yourself. There are more reliable places to get information. For example, Consumer Reports provides factual information on the ACA. One of the key ways why the special interests are so successful is they know we outsource our thinking – we are so willing to let others think for us…and we’re so gullible.

“We all lead busy lives, but educating yourself is important. Think beyond yourself. Think about your children and the kind of world we’re creating for them. It’s important to spend a little time to get informed before you pull a voting lever.

To hear Wendell Potter in his own words, see below: