Will It Take A Constitutional Amendment To Stop Voter Suppression?

There’s a bittersweet taste to the approaching 50th anniversary celebration of the Voting Rights Act. We will honor the incredible struggles of those who marched in Selma as well as recognize leaders such as by Senate Majority Leader Mike Mansfield (D-MT) and Senate Minority Leader Everett Dirksen (R-IL) for their relentless work to ensure no Senate filibuster and thus passage of the bill. (Yes, in days that I can remember, Republicans could do the right thing).

But as great as those individual and group efforts were to strengthen our democracy by prohibiting racial discrimination in voting, the recent and persistent efforts in so many states to restrict and suppress voting have threatened the basic foundation of our democracy unlike anything we’ve seen in five decades. Add Nevada — with its Republican-controlled state house and governor — to states pushing for voter suppression laws. The all too long list includes Wisconsin, Ohio, North Carolina, Texas, and others. The Brennan Center for Justice reports at least 83 restrictive bills were introduced in 29 states ranging from reducing early voting hours to harsh photo ID laws. We here at Wisdom Voices Press have long spoken out against these laws designed to disenfranchise rather than expand the vote. 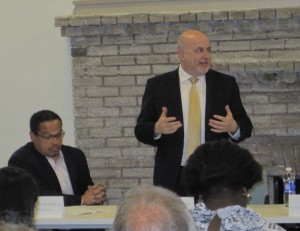 Rep. Keith Ellison (DFL-MN), left, and Mark Pocan (D-WI) talk to a group about their bill to provide a constitutional right to vote.

That’s why we were excited to join a standing-room only crowd last week at the Emerge Career and Technology Center in North Minneapolis in which Minnesota Rep. Keith Ellison returned to his home district and was joined by Wisconsin Rep. Mark Pocan to discuss their bill (H.J. Res. 25) that would amend the U.S. Constitution to explicitly guarantee the right to vote. The Amendment would provide all Americans with the affirmative right to vote.

“Right now we have politicians selecting their voters rather than voters selecting their elected officials,” Pocan told the crowd. “Most Americans consider voting a basic right, but some states are chipping away at voting rights and making it harder for citizens to cast their ballots.”

“In 2015,” Ellison said, “We should make voting as easy as possible. Nothing should stand between Americans and the voting booth.”

And Minnesota Secretary of State Steve Simon reminded the crowd of Minnesota’s rich culture of encouraging the right to vote. He thanked all for their tireless efforts to beat back a photo ID constitutional amendment in 2012 and heard thunderous applause when he said one of the goals for Minnesota is felon voting rights restoration, which could impact as many as 47,000 in the state. Voting restoration rights is gaining traction nationwide, with Maryland just recently passing similar legislation, which could also impact upwards of 40,000.

“The only way to have a vibrant democracy is if everyone has the right to vote,” Pocan said.

But perhaps most encouraging with the gathering was the predominance of young people from organizations such as Neighbors Organized For Change and Justice For All and other spokespeople for immigrant communities speak with passion about working to keep the right to vote vibrant and strong. They knew that the combination of the disastrous U.S. Supreme Court Citizens United decision, combined with voter suppression laws nationwide mean the squeeze is being put on our democracy. “It’s no accident that there are systematic barriers to voting rights,” one said. Ellison, who just returned from Ferguson, Missouri, where he worked to “get out the vote” in a city ripped by racial tensions after the death of Michael Brown last summer. “They increased voter turnout from 12 percent to nearly 30 percent,” Ellison said. “Thirty percent still is low, but we have to remind people that they can make their democracy work.”