A Question of The Heart: What’s Really Afoot in Wisconsin?

Perhaps it’s time to take the discussion of what’s happening in Wisconsin and the nation to a deeper level. To date, Governor Scott Walker’s attempt to claim that h 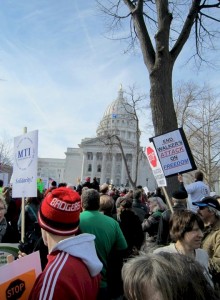 is budget repair bill is about fiscal matters has been debunked and unmasked for what it really is: the destruction of unions and the rule of billionaire brothers attempting to buy a state’s elected officials. We have all asked the questions: How did this happen? How did he get elected? How did we allow our democracy to get to this level? These are questions of the head and intellect. I would offer that what really is afoot in Wisconsin pertains to questions of the heart.

Where is the moral outrage at what is being done to working and middle class families and to the poor and disabled? How have we as one country found ourselves in discussions that always centers on “us vs. them?” Why is there no moral foundation on which these discussions happen? Where is the sense of moral purpose that binds us as a country? How can we let the greed of corporations and the top two percent of our population crush the needs of so many? Why do we engage in illegal wars that kill vs. providing funding for life-giving programs? Where and how did we lose the concept of the common good, shared sacrifice (by all, not just some) and the fact that we are all interconnected as part of the human race?

To answer these questions, we need to look deep within ourselves, first as individuals and then as a country.

For me, I was struck by a phrase I recently read that said: “Spiritualism is the highest form of political consciousness.” How and why had this author connected the spiritual question with politics? For me, I answered it with the realization that our political consciousness is what defines us as a society and people. We cannot separate the heart and soul of who we are as a society. And without a spiritual (not religious) component to the political discussion, we have lost our moral compass.

Jim Wallis, founder of Sojourners, discussed the same topic nearly 17 years ago in his book “The Soul of Politics” when he wrote:

“The politicians of the major parties have yet to articulate and demonstrate a new vision of politics, based on a renewed sense of both personal and social morality. Neither party has confronted the underlying cultural forces of our society that are key to political transformation. When have we heard a national politician speak of the materialism of American society as a moral issue, even though its powerful influence virtually shapes the whole social order and establishes the limits of political change?

“How many public officials are willing to discuss the relentless pursuit of power that so dominate contemporary political life and social policy? What candidate will be honest enough to talk about the power of money over the political process and be willing to offer a personal example of real financial integrity by simply refusing the contributions of special interests.

“Politics is the discourse of our public life. Politics can make a great difference, for good and for evil, in the ways that we live together. It is possible to evoke in people a genuine desire to transcend our more selfish interests and respond to a larger vision that gives us a sense of purpose, direction, meaning and even community. A new framework, new language and new visions could emerge from resurrecting our most basic personal and social values. By its very nature, politics is a community activity, a populist search. Politics must no longer be left to the elites who have taken over the processes of public decision making in this country. When politics is almost exclusively defined at the top of the society, it invariably will be defined more by power than by moral values.”

That was 1994. We should thank the people of Wisconsin for providing a platform that brings the much needed discussion back to the essential question of “who are we as a people?”

We must answer that question from our hearts. For when we have given away our souls, there is very little left of us that has much real worth.

This entry was posted in Fighting Bob LaFollette, Wisconsin Politics and tagged This Is What Democracy Looks Like. Bookmark the permalink.