“Remember, that those who have power and seem invulnerable are in fact quite vulnerable.  Their power depends on the obedience of others and when those others begin withholding that obedience, begin defying authority, that power at the top turns out to be very fragile.”

It’s easy to miss so much in the news these days. Stories that would have dominated headlines for weeks a generation ago, barely make a blip on the 24-hour news cycles of corporate media. So, we wanted to take a moment to highlight two important stories that continue to remain under the media radar, but yet offer glimpses of hope. Not everyone is paralyzed by the overwhelming world in which we find ourselves.

As we take a turn toward the second half of 2018 and head for November 6, 2018 (the day we can triage the wounds and stop the bleeding), we wanted you to know – there are individuals/movements that have gone past the paralysis that seems to be gripping us as a nation. We have the power to change things. Below are a small reminder of some who are trying.

If you’re not aware of Tom Steyer’s “Need To Impeach” petition (and his listed reasons for impeachment), which began last October, we invite you to find out more and considering joining more than 5 million others who have signed his petition calling for the impeachment of Donald Trump. Since Steyer began this journey, he has taken his message on the road to town halls across the country engaging Americans who want to know “what can we do” to stop the lawlessness and corruption of this president. In a recent visit to Minneapolis, Steyer addressed an engaged, informed, and truly frustrated/angry crowd and told them:

Tom Steyer and the ‘Need to Impeach’ petition drive is making stops all across the country.

“When we started this petition drive last October, we knew things would only get worse. We knew there would be events that would happen that would make our case for us. In October, Mr. (Robert) Mueller had not indicted anyone. No one had pled guilty. Then, two weeks ago, the Trump Organization took $500 million from the Chinese government. So, what we’ve seen is a continued deterioration of the rule of law.

“We also know that the political establishment does not want you to be sitting in those chairs tonight.  They do not want me to be up here. They don’t want any discussion of impeachment or discussion of holding this president to account because they believe it is not in their interest. And so, we had to think – because there is a lot of criticism of holding this president to account. And we came up with two very simple rules of what we’re going to do.”

“We’re going to try to show them that the American people have a voice of their own…and it’s a voice that’s very patriotic and respects basic American values. Telling the truth when it’s difficult is the tradition of America that has allowed us to overcome the tremendous difficulties of the last 200 years.”

Steyer acknowledged the need to impeach must be a bi-partisan effort and why so much of his focus now is grass roots organizing to help change Congress on November 6, 2018. It’s up to us, Steyer said to not only “flip the House,” but we must also show both parties that this is the will of the people. “Only patriotic Americans  – not an individual party – will make the difference,” he said. “We’re trying to organize so both parties hear this is what the American people want. We’re looking at this as straight-up patriotism, not partisanship.”

Don’t say there’s nothing you can do right now. This is one small step that can help push forward the “need to impeach” this lawless, reckless, and dangerous president.

Our political conversation has lacked many things over the past decades. None more obvious than the inclusion of a moral narrative. That’s been changing since the launch of the Poor People’s Campaign: A National Call for Moral Revival on Mother’s Day, May 14.

The Poor People’s Campaign is the nonviolent social change movement aimed at the reviving the core components of Dr. Martin Luther King, Jr’s message of nearly 50 years ago. That is, the oppression of the interconnected triple evils of poverty, racism, and militarism.

The guiding principles of the Poor People’s Campaign include sustained moral direct action as a way to break through the noise and the tweets that surround everything today and to shift the moral narrative.  They are bringing together poor and marginalized people from all backgrounds, places, and religions to stand up for their lives and rights by calling for a “revolution of American values.”

To that end, the Campaign has been waging dozens of protests and civil disobedience across the country, with thousands of civil rights advocates, low-wage workers, and religious leaders leading the way. Their 40 days of protest are aimed at showing the power of people coming together across issues and geography and putting bodies on the line to the issues that are affecting us all.  Shown below by the Wisconsin Poor People’s Campaign organizer Wendell Harris who recently told followers at the capitol in Madison, “Don’t let anyone turn you around.”

Wisconsin Poor People’s Campaign organizer Wendell Harris who recently told followers at the capitol in Madison, “Don’t let anyone turn you around.”

Or this recent group in Albany, NY demanding healthcare and a healthy planet for all. 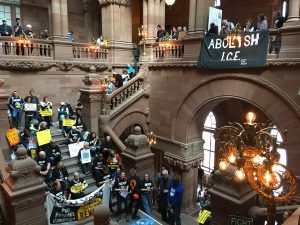 In New York, the Poor People’s Campaign advocated for healthcare and clean air for all.

Hundreds have been arrested across the country (New York, Washington, Kentucky, Missouri, Iowa, California) and many more events and protests are planned for the rest of June.  You don’t have to be arrested, but you can be aware of what’s going on and support the Campaign’s efforts. To find an event near you, click here.

Co-directors of this protest movement are the Dr. William Barber and Rev. Dr. Liz Theoharis. Dr. Barber is a longtime civil-rights activist, and president of the North Carolina NAACP. He is the co-author of The Third Reconstruction: Moral Mondays, Fusion Politics, and the Rise of a New Justice Movement.  You can read more on Rev. Barber by clicking here. Rev. Theoharis is the co-director of the Kairos Center for Religions, Rights, and Social Justice. She has worked as an organizer with people in poverty for the past two decades, collaborating with groups such as the National Union of the Homeless, the National Welfare Rights Union, and the Coalition of Immokalee Workers. To read more about Dr. Theoharis, click here.

War rages; plastics are killing our oceans; climate change threatens our very existence. Overwhelming? Yes. Impossible to change? No. But it takes action. What are you doing today to try and stop the insanity?

We can’t all be Tom Steyer or found a Poor People’s Campaign, or be the students from Marjory Stoneman Douglas high school (who are now embarking on a national summer tour to register young voters). But we can each do something. Speak up (to friends, family, legislators). Sign petitions. Support events in your area. Don’t become apathetic. Learn how our government functions. Vote…even when it seems the system is under attack. We cannot give up.

As Howard Zinn (above quote) reminds us: The power at the top is indeed very fragile when we stand up to the bullies.