Henry A. Wallace: The ‘What Ifs’ Are Inescapable

Avid listeners, like me, to the Thom Hartmann Show know that recently he has been talking and quoting a lot from Henry Wallace, Franklin Roosevelt’s vice president from 1940-44. And anyone who knows if Thom Hartmann speaks passionately about an individual, you need to pay attention. Hartmann quotes extensively from Henry Wallace’s April 1944 New York Times article “The Danger of American Fascism.” If you’ve not heard Thom quote from it – or really want to have a “wow” moment in terms of a prognosticator’s predictions for what awaited the US, it’s worth the read.

I can remember grade school history when we simply learned in one sentence of Wallace: He was dropped from FDR’s 1944 ticket because Wallace was too “controversial.” I must admit, until Thom Hartmann reminded me of Wallace, I had simply never delved into what that simple 5th grade history book context meant by “controversial.”

So I started down a brief study of this man who came within an eyelash of being U.S. president and just what was so “controversial.” The following by no means is a detailed biography, but rather a succinct look at someone who earned the “controversial” label because he mainly advocated for peace and social and economic justice. 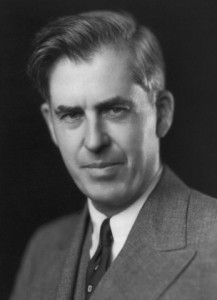 Henry A. Wallace was born on October 7, 1888, near the town of Orient, Iowa. He was deeply influenced by Iowa’s rural culture, and would later serve as FDR’s Secretary of Agriculture. The agrarian lifestyle and communal society of turn-of-20th century Iowa formed his values. The Wallaces were a prominent Iowa family with deep roots to agriculture, and Henry’s father served as Secretary of Agriculture for Warren Harding and Calvin Coolidge.

As a student at Iowa State College (a land grant public institution) Wallace studied plant genetics and crossbreeding. He discovered and patented a successful strain of corn that produced a greater yield while resisting disease better than normal corn. This allowed Wallace to found his own business to manufacture and distribute the plants, a venture that gave him valuable experience for his later career in public service.

Wallace came from a traditional Republican family; but the shock of the Great Depression and its impact on rural America forced Wallace to reevaluate his political affiliations. Disgruntled by the Coolidge and Hoover agricultural policies, Wallace threw his support to the Democrats in 1932—FDR’s first run to the presidency. Wallace was rewarded by FDR, who named Wallace Agriculture Secretary. Wallace’s vision of a thriving rural society was in shambles in Iowa by 1932. Corn was so worthless that many farm families burned it to keep warm instead of sending it to market. Total farm income fell by two-thirds between 1929 and 1930 and six of every 10 farms in his beloved Iowa had been mortgaged.

As Agriculture Secretary, he proposed and presided over New Deal-era agriculture programs, including:

To understand his ascendency to and subsequent fall from the role of vice president, one has to remember the intense party nomination processes of decades ago; long since replaced by the modern primary procedures we have today that nominate a candidate who choses his vice president. In fiercely contested battles in 1940 and 1944, Wallace battled Democratic Party bosses for the voice of social liberalism. In hotly contested delegate gatherings and convention floor battles that were waged over “favorite sons”, Wallace first won, then lost the vice presidential nomination. 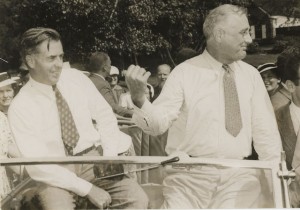 Victorious in 1940 as war became more of a reality for the United States, Wallace remained an ardent supporter of the New Deal’s economic policies and helped develop ambitious plans for “full employment” in a post-war era, advocating for a “Century of the Common Man.” He envisioned a century in which “no nation will have the God-given right to exploit other nations,” where “older nations will have the privilege to help younger nations get started on the path to industrialization,” and where there “must be neither military nor economic imperialism.”

The “people’s revolution” as Wallace saw it would become the mechanism for social change at home and abroad. He saw the chance to organize the postwar world around, “the eradication of human suffering and poverty…” and believed… “there must be genuine democracy in approaching problems of the human soul and access to raw materials.” He felt that unity among nations after the war would permit the US to lead in the transformation of the postwar world from scarcity to abundance while keeping the world free from domination of American business.

In January 1944, just before FDR’s introduction of the Economic Bill of Rights (a great read in itself), Wallace spoke of reviving the New Deal (lost in part to efforts to win World War II) in which he denounced international cartels that created the inequalities of technology, raw materials, and markets that produced wars. Wallace also insisted, “when the time of peace comes, the citizen will again have a duty, the supreme duty of sacrificing the lesser interest for the greater interest of the general welfare.” For, like FDR, Wallace firmly believed that above all else World War II was caused in large part by the global economic crisis that brought on the Great Depression and the concomitant rise of fascism. It is for this reason that both he and President Roosevelt placed such a great emphasis on the need to rid the world of poverty and despair.

His May 1942 “The Century of the Common Man” speech laid out his vision for peace; in it Wallace said, “a fight between a slave world and a free world” would exist. “Men and women can not be really free until they have plenty to eat, and time and ability to read and think and talk things over….when the freedom-loving people march; when the farmers have an opportunity to buy land at reasonable prices and to sell the produce of their land through their own organizations, when workers have the opportunity to form unions and bargain through them collectively and when the children of all the people have an opportunity to attend schools which teach them truths of the real world…then the world moves straight ahead.”

In his 1973 book, “The Rise and Fall of the People’s Century: Henry A. Wallace and American Liberalism, 1941-1948,” Norman Markowitz details the 1944 Chicago Democratic Convention floor fight and just how close Wallace came to retaining the vice presidency. In page-turning drama in the chapter: “The Missouri Compromise of 1944,” we learn how Harry Truman ascended to that key position and how the party bosses shut out the progressive wing (sound familiar?). Upon FDR’s death in April 1945, Hubert H. Humphrey wrote to Wallace and said (in part)… “How I wish you were at the helm…”

The “what ifs” have been uttered since.

He remained active within the Democratic Party and political circles throughout the late 1940s and 1950s, but near the end of his life he returned to Iowa and wrote about the threats of a modern industrial society and what it posed to human values that were born from connections to the soil. He maintained that identity with the land served as the basis for the spiritual growth of civilization and that urbanization “can cause psychic, aesthetic, and spiritual losses as well as material gains.”

He eventually succumbed to Lou Gehrig’s disease on November 18, 1965. In one of his last letters to a friend in July 1965, Wallace wrote: “First we must remember that the Democrats inherited Vietnam from the Republicans who in turn had inherited their policy from Truman. Truman and (John) Dulles took the steps which will make the USA bleed from every pore.”

We encourage you to read more about Wallace. A great 2013 piece from TruthOut “Henry Wallace, America’s Forgotten Visionary” can be found here. Or check out his “Century of the Common Man” speech below.