How Does One ‘Recount’ Ballots Cast On Paperless Systems?: A Disaster Waiting To Happen

We have written extensively here about voter suppression and the manipulation of votes cast on electronic voting machines.  The very fabric of our democracy has been attacked in ways and measures unlike anything we have ever seen before.   We are just two days out from casting ballots that will decide everything from the presidency of the United States to land and soil commissioners on the local level.  And yet, the stories do not stop about voter suppression and electronic voting machine shenanigans.

Who votes and how we vote will be a conversation that cannot stop after November 6.  We owe it to our country.

We are pleased to reprint here – with permission – a blog that appeared on the Huffington Post regarding the hazards of trying to do a recount of ballots when we use paperless, electronic voting machines.  Let’s set aside for the moment that the machines can be hacked (if the Pentagon can be hacked, how easy do you think it is to hack an electronic voting machine). Let’s just look at the horror that awaits us if a recount is in order.

As we move deeper into 21st century technology, there remains only one way to guarantee an accurate vote count – paper ballots.

We risk an election meltdown worse than the Florida 2000 debacle when the presidential election came down to hanging chads and chaos. This time we are looking at another razor close result and perhaps another recount.

However, if a recount is required in either of two key states — Virginia and Pennsylvania — we risk catastrophe, because most of those votes will be cast on paperless voting machines that are impossible to recount.

To make matters even worse, the wake of superstorm Sandy could cause disruption on Election Day. Polling places without paper ballots that lack power will have to close, resulting in voter disenfranchisement. This is inexcusable, especially as voting advocates have long urged states to provide emergency paper ballots.

Other states present their own hazardous recount challenges. About one quarter of voters nationwide will use paperless direct-recording electronic (DRE) voting machines, most of which have touch screens. Unfortunately, the DRE software can store voters’ choices incorrectly.

Software is notoriously buggy, which is why software vendors, notably Microsoft and Apple, are forever sending out software fixes, many of which patch security holes.

In the event of a recount, paperless DREs will spit out the same unverified numbers as before, numbers that could be wrong. There will be no paper ballots that accurately represent the voters’ choices to determine the correct outcome.

For example, during the June 2011 Democratic primary in Cumberland County, New Jersey, an incorrectly programmed paperless DRE switched votes, causing the actual losers to be declared victors. In this small election the declared losers, knowing they had received more votes than the DRE reported, obtained enough supporter affidavits to have the election overturned and a new one ordered. Had there been paper ballots, a new election would have been unnecessary, because the paper ballots could have been recounted.

In addition, two notoriously unsound paperless DRE systems are widely used in Virginia; years after their inadequacies had been exposed. The AVS WINVote and the Unilect Patriot were both decertified in Pennsylvania. In two other battleground states, Colorado and Florida, many votes will be cast on paperless DREs. None of these votes can be recounted.

Florida is a good news/bad news state. The good news is that paper ballots tabulated on optical scan machines are the standard voting systems statewide. The bad news is that paperless DRE systems are used in almost all counties to provide accessible voting for voters with disabilities, even though there are far better options. None of the votes cast on these paperless DREs can be recounted. 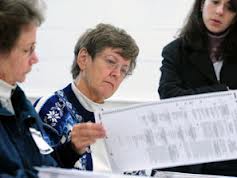 Minnesota went through two recent recounts and had access to a paper trail of votes cast. Imagine doing a recount where no paper trail was available.

Florida legislators, with memories of 2000, seem determined to prevent recounts. Because of drastic changes to state election code that severely restrict how many ballots are counted by hand, it is essentially impossible to conduct a valid statewide recount. According to Ion Sancho, Director of Elections for Leon County, “Florida does not allow a manual count for over 99 percent of its ballots.”

Another machine failure that changed election outcomes occurred in the March 2012 municipal election in Wellington, FL. Two losing candidates were declared winners by voting system software that incorrectly swapped totals among candidates. The discrepancy, discovered during a post-election audit, resulted in numerous court hearings. Eventually, a hand count of the ballots confirmed that the original electronic tally was wrong. County elections director Susan Bucher said, “Frankly, without paper ballots and without audits, we would have let the wrong winners serve.”

The following swing states do not guarantee that all of their paper ballots will be hand counted in a recount: Colorado, Florida, Iowa, Ohio, North Carolina and Wisconsin. Instead, these states allow paper ballots to be re-scanned or “retabulated” by the same voting machines (optical scanners) that counted the ballots on election day. Here’s why this poses a problem.

As illustrated by the Wellington and Cumberland near-fiascos, machine retabulation ignores the risks that computer-reported results could be incorrect, either because of software failure or hidden malicious software that manipulates results.

What should be done at this late date? All jurisdictions that have both paperless DREs and paper ballots with optical scanners should strongly encourage voters to vote on paper ballots.

Jurisdictions that allow either a manual recount or a machine retabulation should count by hand. We need legislation to ensure that every state uses only paper ballot systems and conducts meaningful audits and recounts. Accurate and verifiable elections are essential for our democracy so that all voters trust election outcomes. We must stop spinning the recount roulette wheel.

Mark Halvorson, founder and former director of Citizens for Election Integrity Minnesota, organized non-partisan observations of Minnesota’s 2008 and 2010 recounts and created a database for recount laws.

Barbara Simons, co-author of the recently published Broken Ballots: Will Your Vote Count?, is retired from IBM research, Board Chair of Verified Voting, and a former President of ACM, the oldest and largest scientific society for computing professionals.

This entry was posted in Democracy, Voting and Electronic Voting Fraud. Bookmark the permalink.