Mercy Killers: The Drama of Real Life Health Care In The U.S.

Imagine sitting in your apartment at 3 a.m. in agonizing pain and not knowing what the source of the pain is. Add to it the fact you know you have no insurance and you are wondering what to do. That’s exactly what happened to Michael Milligan, actor and author of the one person play Mercy Killers, which will be performed Monday November 12th at Hell’s Kitchen (see sidebar below) in Minneapolis.

Of course for anyone with that condition living in any industrialized country in the world other than the United States, the idea of wondering what to do is a foreign concept.  They simply seek medical treatment.  In the U.S., however, the luxury of healthcare as a right is still not a reality. We remain the only industrialized nation in the world with a for-profit health care industry that still leaves as many as 44 million people without coverage and hence, the dilemma of what to do when one is ill.

“As I lay there in excruciating pain at 3 a.m., I thought to myself, ‘Oh, this is what it’s like to be uninsured in America,’ ” Milligan said.  “I later found out I had passed a kidney stone.  But for someone else, it isn’t kidney stones, it’s cancer or something else life threatening.

“So I had the kernel of the idea for the play before that, but that event triggered me to put it down on paper.  I downloaded books and I read everything I could about the health care industry.  I talked with people about their health crisis and I talked to doctors so that the material (for the play) was accurate.” 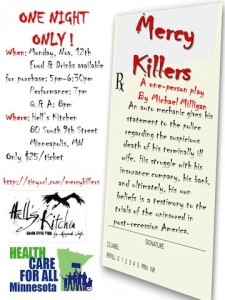 Mercy Killers will be performed Monday November 12th at Hells Kitchen in Minneapolis. Ticket information can be found at www.muhcc.org/

The result is Mercy Killers, a one-person play about an auto mechanic who gives his statement to the police regarding the suspicious death of his terminally ill wife.  The man’s struggles with his insurance company, his bank and ultimately his own beliefs is a testament to the trials of the uninsured in post-recession America.

“I was trying to take what people read or what they see in the news about health care but I wondered how do you translate that to the human component so that it would really spark their empathy and outrage (at our current health care system),” Milligan said.

“The thesis (of the play) is extremely critical of the health insurance industry. The couple (in the play) loses their coverage, not for pre-existing condition but because they fail to respond to a questionnaire. They fail to respond because they are temporarily living in a trailer park where they don’t receive mail. That’s something that can happen.  That specific example was taken from the case of a woman who was giving testimony to Congress during the health care debate.

“The added thing is this guy (in the play) is actually a Tea Party kind of guy.  I wanted to explore and understand that mindset – that sense of self-reliance.  He wants to do it all himself and as he’s giving his testimony to the police (about how his wife died) he also is dealing with everything that has happened and confronting his belief about things. It’s tragic; he can’t get over the fact that he has failed…that this was all his fault…that somehow if he was smarter/richer/done more that somehow it would have been different.” 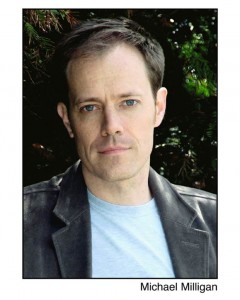 Milligan, a veteran Broadway and off Broadway actor, is Julliard School trained and the 2001 winner of the John Houseman Award.  He currently is performing at The Guthrie in Minneapolis in Appomattox, a two-act play.  The first act is set in the final week of the Civil War in April 1865 and the second act takes place a hundred years later in April 1965 and focuses on the death of Jimmy Lee Jackson, which unleashed the Selma and Montgomery marches for voting rights for African Americans.

“I was a bit ambivalent about coming out here (to the Guthrie) and interrupting this piece,” Milligan said.  “The feeling of working on something so close to your heart and soul, is like night and day compared to being hired to do something.

“When I got the job, I knew I still needed to be developing this piece (Mercy Killers) – or else it would disappear and it can’t. The response I got from the first two readings I’ve done with it is such that there’s a need for someone to say something about our health care system in a way that engages people and asks them to think and question.”

That desire led Milligan to contact HealthCare for All Minnesota, a group dedicated to bringing single payer health care to Minnesota. HealthCare for All Minnesota warmly welcomed Milligan’s offer to perform the play as a fund raiser.  Although grateful that the Affordable Care Act takes us a small step down the road to health care reform, Milligan is a strong proponent of single payer.

“There are some good things in the bill (ACA) but to me, the bill doesn’t address the fundamental question of why do we have uninsured people,” Milligan said.  “We still have middle men who don’t provide anything.  They’ve brainwashed us to think that (single payer) would create a faceless bureaucracy that will control us when they (the insurance companies) have a bureaucracy that is collectively five times as large as Medicare.

“Health care is not the place for free market efficiencies.  Fundamentally, health care is a human right and the challenge is to attack the underlying idea that we can just be responsible for ourselves individually.  We just can’t do that with health care.  A major health crisis is beyond an individual’s responsibility for themselves when costs can go to $600,000.  You can’t say you should be responsible for yourself and that you’ll do something like go get an MBA and work on Wall Street to pay off your health care debt.  There is a better way.”

There’s also a bit of genealogy in the Milligan family that has helped form Michael’s outlook on health care and other issues.

“My dad was really interested in genealogy when I was a young man,” Milligan said. “What he discovered was that a lot of our ancestors were what I call ‘religious communitarians.’ Amish, Mennonites, Quakers, Moravians. The beliefs of these early settlers really challenges the sort of ‘Wild West,’ ‘every man for himself’ narrative which is so prevalent in our sense of American history.

“These people came to live in deep community with each other. Community based on principle. My dad found this wonderful old saying of the Moravians that I find to be very moving and profound. It goes like this: ‘In that which is essential, Unity. In that which is not essential, Liberty. In all things, Love.’

“That simple statement resolves a great many of the ideological schisms which divide our country. Some things require us to come together as a people, and those areas which are not essential are areas where we exercise our freedom and liberty. The conversation ought to be about what is essential and what is not. Health care, for example, is essential. Dictating whom your neighbor loves or can marry, is not essential.”

“Most people don’t know that over 60 percent of bankruptcies in the United States are due to medical debt,” Milligan said.  “And the majority of these people filing had insurance at the onset of their medical emergency. Mercy Killers is my attempt to take that data and translate it into the actual human experience for working people, especially since the recession.”

The play is the story of a husband who gives his testimony to police who are investigating the suspicious death of his terminally ill wife. 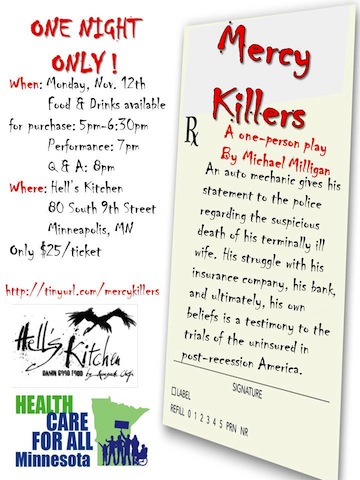 In addition to the November 12th performance, Milligan will be performing Mercy Killers in Duluth on Monday, October 29 at 7 .m. at the Play Ground Theater, 11 Superior St.

Milligan plans on taking the performance back to New York at the completion of his current Guthrie run in Appomattox. Long-term goals for Mercy Killers include an off-Broadway run of the play as well as finding backing to be able to take the play to a national audience.

“Health care is not a free market commodity.  It is a human right, and the fight is in the states like with what HealthCare for All Minnesota is doing with their push for single payer.”

For information on how to order tickets for the play, click here.