Playing Bigger Than You Are: No One Said It Was Going To Be Easy 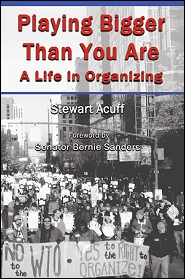 Stewart Acuff's look back at 30 years of union organizing

Of the many lessons woven throughout Stewart Acuff’s book Playing Bigger Than You Are:  A Life in Organizing (Levins Publishing, Minneapolis) is the valuable perspective he shares about the day-in and day-out work that is the reality of union organizing. Too often in our 24-hour news cycle culture, we tend to think everything is accomplished with the snap of a finger.  Instead, it’s the hard work of perseverance, resolve and daily efforts that bring about social movements and change that is chronicled in his book.

In Playing Bigger Than You Are, Acuff:

Through his 30 years of organizing (which included arrests and jail) detailed in the book, Acuff remains true to his belief that the struggle for workers’ rights is rooted in fairness, righteousness and the lessons of nonviolence exhibited by Dr. Martin Luther King, Jr. and Mahatma Gandhi.

Playing Bigger Than You Are also stands as a testament to the critical need to recount our life’s stories – both for the generations to come and as a reminder of the values, the common purpose and the shared sacrifice that brings meaning to our lives.  Acuff provides a powerful reminder and documents the struggles and triumphs that have shaped his life and that of the American labor movement. He remains forever optimistic and focused:

For more information on how to order the book, click here.