Rev. Al Sharpton: ‘I Believe We Can Keep Moving Forward’

It was an opportunity I couldn’t resist. The Rev. Al Sharpton, one of the leading African-American voices in our country, speaking at what some could consider the poster child for Norwegian America: St. Olaf College in Northfield, Minnesota. So that’s where I headed Monday night, on a trek about 45 minutes south of the Twin Cities. It was well worth the effort. 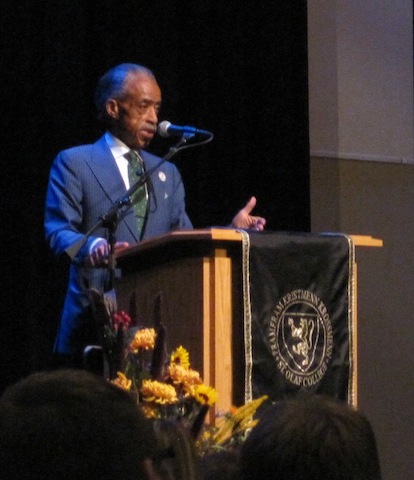 Rev. Al Sharpton at St. Olaf College: “My generation didn’t finish the task. I believe your generation can bring us there. I believe that if you don’t duck the issues and you’re not afraid to confront what is uncomfortable in the short run, it will bring about equality in the long run.”

Rev. Sharpton presented a heartfelt and inspiring speech and his message of continuing the fight for racial and economic justice was met with standing ovations and thunderous applause by the nearly 1,000 (mostly students) who packed the Skoglund Center on campus. It was a great reminder that not only does the struggle continue for racial equality but that the next generation stands poised and ready to carry the torch of fulfilling the dream of achieving it.

“I’ve come to talk about race,” Rev. Sharpton said in his opening comments. “We don’t talk candidly about things people want to discuss. We try to avoid them in the name of trying not to deal with things that are uncomfortable. But we’re more comfortable and mature when we are candid about what we need to talk about.”

Indeed progress around race has been made, Rev. Sharpton said. He pointed to the election and, perhaps even more importantly, the re-election of Barack Obama as evidence of that. He also mentioned that in cultural terms great progress had been made. Unlike his youth, there were no longer separate music icons. On one side, Rev. Sharpton said, he had grown up with Elvis Presley; and on the other side was James Brown and the Motown sound. Today he told the audience Beyoncé is Elvis. But he cautioned about drawing the conclusion that because progress had been made in political and social venues that we had “arrived” in a post-racial era in America.

“I flew to Minneapolis this morning and we encountered a bump or two in our ascendance,” he said. “When the bumps cleared out, my traveling partner and I did not de-plane. A lot of us are trying to de-plane in post-racial America before we’ve arrived at the terminal of racial equality. Do not confuse the lack of disturbance with racial equality. I’m convinced that most Americans don’t really seek peace as much as they seek quiet. But there’s a difference between peace and quiet. Quiet means we shut up and suffer in silence and don’t complain. Peace means that all of us are at peace. So when a Trayvon Martin or a Ferguson happens people are shocked into a kind of reality that they try to ignore. I think if we deal with the issues, we can solve them; they will never go away by themselves.”

He challenged the younger people in the crowd to question authority. “Any time something becomes ‘all the way right all the time,’ he said in reference to those who refuse to question police tactics, “we teeter on becoming a police state. Young Americans have to ask, why is it healthy to be in a country that can’t question the police? Why is it un-American to ask why an unarmed African-American youth was killed by police or un-American to ask why a man was chocked to death by police when he said 11 times he couldn’t breathe.”

Rev. Sharpton broke down the racial challenges in the 21st century into 3 categories: education, economic inequality, and the criminal justice system, saying that unless we are willing to make progress in those areas we are not where we need to be in a post-racial society. “We can’t have an equal society when we don’t have equal educational opportunities,” he said to rousing applause. “When you look at the unequal investment based on zones and geographic areas, clearly it is reflected in the gap between black students in reading, math and science. Investment in education is important and it starts with primary education and goes forward.

“I believe in investing in public education to address the inequality,” he said as he referenced a story in 2009 when he and former Republican Speaker of the House Newt Gingrich toured the country together to look at the educational gaps that exist and solutions to the problem. “Newt believes in privatization. But I think as we went around the country together he realized that it’s not that the children in inner cities can’t learn, it’s that the opportunity for them to learn isn’t there.

“And to privatize education means that you select some, not all kids. I don’t care how good the process is, the conclusion you come to is that you’ve written off the rest. They’ll say that we’ll put 10 percent of you in a special school and give some of you vouchers and look at these kids and how their reading and math scores went up. I say, ‘What about the 90 percent you left behind? What if you had put the resources in for all of them?’ ”

A highlight of his speech came when Rev. Sharpton referenced Malcolm X to illustrate what it means to measure “progress.” “Malcom X used to say if someone puts a knife 6 inches in your back and pulls it out 3 inches, that’s progress…but you still have a knife in your back. It is easy for people who are not in the position of being knifed to judge and gauge and analyze on how you should feel on the progress of withdrawal. They forget the presumption that you shouldn’t have a knife in your back at all. People will say to me,   ‘Reverend, look at the progress we made.’ When the fact is we should never have been in that position in the first place.”

He encouraged the students to look at the coming mid-term elections and the presidential election of 2016 and to vote on the “what” in order to get to the “who.” “We are far too personality driven where we vote on who we like rather than on what they stand for,” Rev Sharpton said. “If we say we want to deal with public education, with making the criminal justice system better and with economic inequality we need to find the candidate that reflects those views.”

And then he touched on the issue that eats at the very fabric of our democracy — voter suppression, which is becoming more commonplace throughout the country. He mentioned Minnesota’s neighbor to the east – Wisconsin in particular. “Right wing pundits will say there’s nothing wrong with ID…that we’ve had voter ID in elections for Nixon, Carter, Reagan, Bush Sr., Clinton, George W. Bush. Why then, I say to them, when we get to Obama do we have to have ‘special ID,’ especially when there’s no evidence of voter fraud. And especially when voter ID impacts minorities, and the elderly and younger voters.

“Why are we changing early voting? Why are we ending Sunday voting? We as a country preach voting all over the world while cutting back at home. Voting restrictions do not speak to those of use who represent to the rest of the world that we are the beacon of democracy. We have got to deal with this move to limit the right of Americans to vote.”

“People often ask ‘Why should government get involved?’ Well first, government has to protect all of its citizens. But second, government has to undo what government helped do. Don’t forget that many of the laws that were overturned were government laws. Rosa Parks didn’t break a Southern ‘custom.’ It was against the law for her to sit in the front of the bus. You can’t ignore that government laws were enforced for hundreds of years and then just say ‘Yeah we took care of that 10 years ago’ and expect generations of institutionalized racism to disappear. We must work on changing these things until we have corrected them. So let’s not put a time limit on this; let’s put a goal on healing this country and the social inequalities.

“My generation didn’t finish the task. I believe your generation can bring us there. I believe that if you don’t duck the issues and you’re not afraid to confront what is uncomfortable in the short run, it will bring about equality in the long run.

“Why do I believe that? Because I watched a man of color sworn in again as President. I watched them lower the flag of apartheid in Johannesburg. I’ve seen too much to not believe that when young people change their minds, they can change society and make impossible things happen. That’s why even though it may be something a lot of people may think impossible, we can keep moving forward and we will see progress.”