Who Better To Lead ‘Our Revolution’

“We need to learn how to flow with the momentum of change. Resisting is pointless; Tolerating it is a meaningless, apathetic response. Learning to flow with it is the only way we can utilize it to our own benefit and to the advantage of universal life.”

–Diarmuid O’Murchu, Our World in Transition

The author penned that quote in 1992…long before the words climate change, fracking, Keystone Pipeline, or OurRevolution.org were in our vocabulary. In our 24-hour news cycle of life we often forget how the evolution of change takes far longer than we realize. 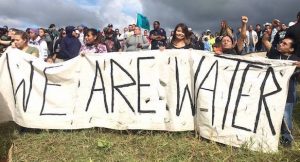 But here we are – today in our time – faced with decisions that will impact the quality of life (or some would argue the existence of our life) on this planet. Slowly creeping into national media headlines is the story of the Standing Rock Sioux and other American indigenous activists who are protesting the proposed $3.8 billion Dakota Access Pipe Line, which they say would threaten to contaminate the Missouri River.

No more they say…to the fossil fuel industry and to the government entities backing this project. Business as usual will not hold.

Once finished, the pipeline would bring oil almost 1200 miles from the Bakken oil fields in North Dakota to Illinois. Although the government approved the project, the Standing Rock Sioux say their interests and historical claims were not taken into account when that decision was made. That also brought their protest to Washington, DC. Judge James A. Boasberg of the US District Court overseeing the case, said this week he will rule no later than September 9 on the request to stop construction and reconsider permits the project has received.

What started as a small peaceful prayer protest by the Standing Rock Sioux to say contaminated water from transporting fracked oil threatened their lands and their life, has now garnered support from across the country. People are phoning the White House; other indigenous tribes are joining the North Dakota protests; and the hashtag #NoDAPL is trending on twitter.

Coincidence that this protest by indigenous people also comes as former Democratic presidential candidate Bernie Sanders launched “Our Revolution” to tap into the incredible grass-roots uprising that spurred his campaign of hope for an evolution on the political front? Perhaps not, as evolution/revolution has been brewing for some time.

The protests also put Native American spirituality roots – the belief there is no separating the natural world from the world of the supernatural – front and center. “Water is our life,” Dave Archambault, the chairman of the Standing Rock Sioux said.

We would never claim to be an expert on Native American spirituality, but we know enough to say the Lakota (Sioux) – as well as other indigenous tribes – have a spirituality based in a “spirit god” that directs a life to maintain balance between the individual and the universe and to live in harmony with nature and the Creator. Has our environmental revolution brought us full circle so that we now come to fully understand what the original inhabitants of this continent knew for hundreds of thousands of years?

“We’re putting a call out for warriors to come here to do direct action, to stop them from boring under this water, because that’s going to contaminate it. We can’t stand for that. We can’t let that happen. I, for one, made a commitment. They’re going to have to kill me, or they’re going to have to lock me in jail, but I’m going to stand to protect the sacred water. And I’m guided by spirit,” said Debra White Plume, an Oglala Lakota water rights activist.

The #NoDALP protests, combined with the planting of “our revolution” seeds, provides a clear sign that the evolution/revolution of change always happens at a grassroots level. It’s “we the people” who provide the needed change. Or, as O’Murchu says in his 1992 book, “We are in a time of transition. It is an exciting space, but a very disturbing one. The old securities are gone; the new possibilities are still vague, and to say the least, ambiguous. The challenge facing all of us is to name what’s going on, connect with its energy, and enhance its positive driving force to carry us into the new future.”

How we connect to this revolution will be an interesting journey to watch. Do you see the revolution around you? Are you listening? Can you feel the energy? Will you be swept up by it? Will you come to understand that evolution and change doesn’t happen in a 24-hour news cycle, one election year, or even in our lifetime? O’Murchu in conclusion of Our World In Transition, tells us:

“Just as we cannot detect or determine how the process of change is initiated, neither can we control its eventual outcome. We use the word transformation to describe, not the final result, but the altered state of affairs that ensues and may continue to ensue for quite a long time. Transformations need not always produce wholesome results, indeed they may lead to the total destruction of a system. For something new to be born, the old may have to diminish; in fact, it may need to become totally extinct. In spiritual language, we describe the process as that of birth-death-rebirth.”

For more information on the Standing Rock Sioux protest, we recommend the following: