It’s always refreshing to talk with an eternal optimist when times seem topsy-turvy, full of turmoil and a bit unprecedented.  Instead of being gripped by fear and trepidation, Jack Nelson-Pallmeyer sees the future as one with endless possibilities for hope in solving the economic and social problems that dominate us today.

“If you take an honest look at the world, you could easily say, ‘we’re doomed; we have climate change; we have this economy that’s crumbling; we have endless war.’ Or you can look at it as a hopeful time,” said Nelson-Pallmeyer, an assistant professor of justice and peace studies at the University of St. Thomas in St. Paul, Minnesota, and a founding member of Minnesota Arms Spending Alternatives Project (MN ASAP).

“Let me give you two examples of why I’m hopeful,” he said recently.  “First, we now have very commanding examples in the world of the power of non-violence (Egypt, Tunisia). We have many peoples embracing non-violent tactics and having those tactics be overall remarkably successful. 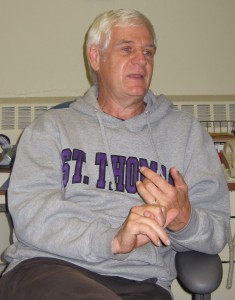 Jack Nelson Pallmeyer's new book due out in early 2012 is called "Authentic Hope: It's The End Of The World As We Know It But Soft Landings Are Possible"

“Second, I think we’re seeing a growing awareness of the failure of a foreign policy that’s based on increased militarization and military spending.  Polls are now calling in larger numbers for us to get out of Afghanistan.  Many people are saying we’re squandering enormous amounts of wealth and wasted resources (in the military sector).  You’re hearing more and more ‘don’t cut Social Security, cut military spending.’ ”

In addition to his teaching duties at St. Thomas, Nelson-Pallmeyer is a nationally recognized writer, public speaker, and activist committed to nonviolent social change. He has focused his life and work on showing linkages between faith and critical political, economic and social issues. He has written extensively on issues of hunger, poverty, U.S. foreign policy, the historical Jesus, and problems of God and violence. He holds a Bachelor of Arts in political science from St. Olaf College in Northfield, Minnesota, and a Master of Divinity degree from Union Theological Seminary in New York City.  His newest book due out in early 2012 is entitled, Authentic Hope:  It’s The End Of The World As We Know It, But Soft Landings Are Possible.

He ran unsuccessful campaigns to garner the Minnesota Democratic nomination for the 6th Congressional District seat (2006, now held by Keith Ellison) and the Minnesota Senate nomination (2008, now held by Al Franken).  It was the grass-roots enthusiasm for change that he found through those election ventures that catapulted him to the MN ASAP initiative.

“When I entered the political arena, it was a dismal arena in many ways.  You saw ugly things such as the influence of money and a lot of cynicism.  But my campaigns had so many signs for hope.  There were many people around the state who were just longing for an honest assessment of where we are as long as those discussions included a sense of possibilities and an invitation for them to be part of the solution.

“It really is the grass roots groups who are doing the effective and creative work to move us into a different future.  That’s where hope really lies.  Hope isn’t rooted in the notion that we’ll elect a politician who will bring about the solution. What we need to do is activate our own potential and stop being the consumers of politics and be more the protagonists for change in what has become a really ugly system.”

The Advent of MN ASAP

After his unsuccessful political bids, Jack struggled with how best to proceed with keeping alive the positive aspects he had uncovered during those campaigns.  That led him to work to help found MN ASAP, a non-partisan citizen-based initiative that uses a simple resolution process to build political support to shift federal spending priorities from war to meeting essential needs. MN ASAP’s goal is to build sufficient political power and influence statewide from representatives at all levels of government and from non-governmental organizations and civic groups to effectively demand a shift in priorities from war spending to meeting essential needs.

Perhaps the easiest way to understand the impact of military spending and war budgets on our local and state economies is to watch MN ASAP’s song/video.

“I began to think of the situation of our state and its $5 billion (two year) shortfall and it became clear to me, that the response from politicians was going to be predictable:  to adopt a program of austerity and to essentially reduce government to those who can slash and burn the programs that are so essential to serving the common good.

“We’ve allowed governance (at the state and federal levels) to be one where monied interests get what they want and that forces cutbacks in all other areas, be it education, health care, all the things that impact quality of life. We needed to call attention to the nature of our debate, the nature of our politics, and the nature of our lives.

“No one was talking about the relationship of federal spending priorities and how it impacts local and state budgets.  And when we did, we found the figures were so alarming.  Yet, we also looked at it as hopeful in the sense of what we could be doing with that money.”

As just one example, Nelson-Pallmeyer pointed out Minnesota taxpayers will be responsible for paying $8.4 billion to fund the U.S. wars in Iraq and Afghanistan over the next two years in which the state faces a $5 billion budget shortfall.

“Imagine what we could do in this state with that $8.4 billion, Nelson-Pallmeyer said.  “That’s enough money, if used here, that Minnesotans could be producing all the energy in this state from renewable resources, which in turn would save Minnesota $20 billion a year, which we spend on imported oil.  Unleash your imagination (when you think of cutting military spending) and think of the expanded library hours…the community centers and community programs we could fund…the class sizes we could have.

“We’re laying out some those figures in simple resolution format and we encourage individuals to do more, because it’s their communities that are being impacted.  We want this to be passed by library boards and city councils and county commissioners and mayors and civic organization, education, labor…everything in our state and county is being impacted in a negative way because of our budget priorities.  The great news here is that arguably if we make these changes, it will enhance the security of this country. Changing our military spending does not make us more vulnerable to terrorist attacks.  The argument remains that the trajectory of our present foreign policy creates anti-American sentiment.

“A lot of good things are happening at the grass roots level, but we have a big wall separating people over here who are doing all that good work in their local communities and then an entrenched system in Washington that is dominated so much by money.

Jack Nelson-Pallmeyer, one of the founders of MN ASAP

“It’s an illusion to think that we’re going to elect a couple of people and they’re going to fix all of that.  My reading is we have to elect better people, but we need a much stronger social movement that goes beyond the typical ingroup/outgroup.  We need one that crosses different barriers and breaks those down.  As those voices gets stronger, those will be the community voices, the civic voices, the populist voice, that’s when we have the prospect of influencing politics.”