Ohio Makes Its Claim: Vote No On Issue 2

The fight for labor, the middle class, and working families shifts toward Ohio and “Vote No on Issue 2” set for November 8.  For those who may need a quick refresher, we went from “Repeal Senate Bill 5” to “Vote No On Issue 2” when 1.3 million Ohioans signed petitions to repeal Senate Bill 5.  Senate Bill 5 was the name of the legislation passed by the Republican state legislature and signed into law by Republican Ohio John Kasich that stripped collective bargaining rights from Ohio public sector workers.

Ohio allows state laws to be put on the ballot for repeal if enough signatures are obtained via the petition process.  And Ohioans left no doubt as to their desire to repeal the anti-labor law.  Think about that number for just one minute.  An astonishing 1.3 million signatures were gathered and submitted in June.  The efforts were led by We Are Ohio, a citizen-driven, community-based, bipartisan coalition.

At the time, Melissa Fazekas, spokesperson for We Are Ohio, said, “Today we celebrate the unprecedented achievement of the more than one million Ohioans who want to repeal SB 5.  This historic number of signatures sends a strong, clear message to the extreme politicians who played political tricks to pass SB 5 and to the rest of the country.  More than 1 million voices from all 88 counties can’t be wrong. The more than 6200 people who marched today and the more than one million who support the citizen’s veto, are proof that while our campaign may be out spent, we will never be out worked, or out volunteered or out supported by hard working Ohioans.” 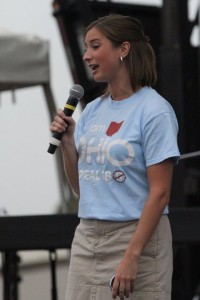 Melissa Fazekas of We Are Ohio

Reflecting back on that achievement, Fazekas said, “We had that cresting moment (of momentum) when we realized we made history for the number of signatures we had gathered.  But we have transitioned now to a campaign process and we have our volunteers out there every day, knocking on doors, making calls and they are just excited about getting the vote out in November.”

The work in Ohio has been a combined effort from all walks of the political spectrum in all 88 counties.  “This has been a bi-partisan coalition,” Fazekas quickly pointed out.  “I was talking with a fire fighter here in Columbus who told me he voted for Kasich but that he never expected what the governor did.  It was like a double whammy for many people.  Not only did voters ask themselves, ‘how did this happen?’ but when the people were literally locked out of the state capitol and their voices couldn’t be heard, that was it for them.

“When people see this kind of attack, they fundamentally know it’s wrong.  We definitely have a feeling among the people on the ground that we are taking back our democracy.”

Fazekas, who has worked in the public sector, took on the job of spokesperson for We Are Ohio because, “my heart and soul is here.  I have family who work in the public sector.  I have a friend who is a special education teacher.  Seeing this all unfold was all very disheartening to me.”

It’s now become Ohio’s turn to “fight back” against the all too familiar anti-worker, anti-union legislation that has clogged Republican-controlled state houses since the 2010 elections.  Unlike Wisconsin, which focused on recall elections to gain Democratic control of one branch of the state legislature, Ohio has the opportunity to actually repeal the entire bill and force its legislature and the governor back to the drawing board.

And perhaps Governor Kasich has an inkling of what to expect in November.  In mid-August, shortly after the Wisconsin state senate recall elections Kasich sent a letter to We Are Ohio asking the group to pull the referendum off the ballot.  It was then that many around the country were treated to Fazekas’ polite but stern, “no thanks” message back to the governor.

Officially the response was as follows:

“We’re glad that Governor Kasich and the other politicians who passed SB 5 are finally admitting this is a flawed bill.  Just like the bill was flawed this approach to a compromise is flawed as well. Our message is clear. These same politicians who passed this law could repeal it and not thwart the will of the people. They should either repeal the entire bill or support our efforts and encourage a no vote on Issue 2.”

She said that taking the referendum off the ballot was never seriously considered.  “We have 1.3 million signatures supporting this,” she said.  “We had 10,000 people working to get the signatures.  There’s a big responsibility on our part to stand with these people on this issue.  The governor and the legislature are the ones who control the (governmental) process.  They could call the legislature back into session and work with us to create a new bill.

“It really comes down to a matter of trust.  The politicians…blame firefighters, nurses and teachers for the budget problems they created by giving hundreds of thousands of dollars in tax breaks to their corporate campaign contributors, while at the same time cutting funding to local communities for safety services. At the same time politicians also left a gaping loophole which exempts them from Senate Bill 5. While claiming we all need to share in the sacrifices, politicians gave their staff members and upper management big pay increases and bonuses.

“Their actions continue to show who is important to them, their special interest friends who spent hundreds of thousands of dollars to help get them elected, not the hardworking Ohioans who serve and protect our families and communities. The hypocrisy never seems to end with these guys. Today Ohioans are left with one simple question, who do you trust more, hypocritical politicians who support this unsafe and unfair law or firefighters who risk their lives to serve and protect us?”

So the grass roots organizing continues, the get-out-the vote work never stops and We Are Ohio recently began its second TV commercial aimed at educating Ohio voters on the issues involved and the importance of showing up at the polls on November 8.

“We’re now in what can best be described as a traditional campaign mode,” Fazekas said.  “We’ll continue to go door knocking, continue to talk to voters.  This is as grass roots as you can get.”

This entry was posted in Democracy, Labor, Social Justice and tagged Grassroots Democray, Ohio, Repeal Senate Bill 5, This Is What Democracy Looks Like, Unions, Vote No On Issue 2, We Are Ohio. Bookmark the permalink.