If you listened closely over the last several months of 2012, the progressive voice of the American people began to get louder and louder. It has never really been silent; rather it has been drowned out over the last 30 years by a noise machine that has made us as a people forget our proud progressive past – that great period of American history that brought us a strong middle class, the Great Society, the environmental movement and proclaimed the idea that we work together as individuals to form a community-based society that believes: We are all better off, when we are all better off.

Our December Progressive Profile proudly salutes all of us who used our voices (and sometimes our feet) to reclaim the notion that we live in a country of, by and for the people – not the corporations, not the elite, not the 1 percent. The American people rose up in every corner of this country and on just about every topic that impacts our lives: voting rights, labor rights, peace and non-violence, and helped us refocus on the important question of what is it we really want from life. And ultimately, perhaps it is the environmental voices that speak the loudest: What does it profit anyone to have a ton of paper money when our very existence on this planet is threatened. 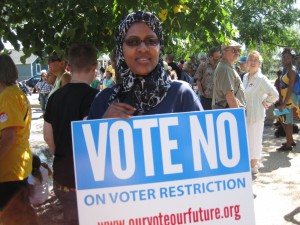 One of hundreds of thousands of Minnesotans who spoke up and “Voted No.”

In a year-end salute to the wisdom voices of the American people, we have included the following as examples.

“As I slowly shuffle around the common area, I thank God for being here and for the peace I experience. I am not anxious or overly concerned by anything…A very touching incident that highlights our treatment by the inmates happened on our second day here when there was a shake down. All the inmates had to file into the big, very cold exercise room while the guards went through our cells looking for contraband. While I was standing there shivering one of the Mexican inmates came up and put his jacket around my shoulders. I was touched by his compassion… I’m blessed by the peace and quiet spirit inside. I’m not concerned about trying to be more than I am with the other inmates. I’m trying to let them see – and not hide or disguise – my lack of knowledge of so many things. I want to be as I have been formed by time and the community of people about me at different stages and positions in my life. Like I said: I’m lucky to be here.” 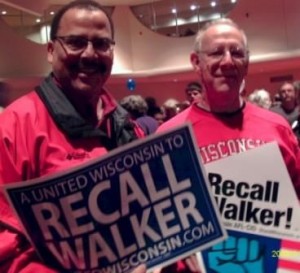 Two of the more than one million who signed petitions to recall Wisconsin Governor Scott Walker. The work continues in 2013.

Progressive voices became stronger, louder, and more unified in 2012; yet it is painfully obvious that they need to grow even more vocal in 2013. A working democracy requires active citizen participation– in our neighborhoods, our local communities, our state, our nation, and the world.

Use your voice (or your feet) in 2013 as if the life of the planet depended on it. And never forget the words of Robert F. Kennedy:

“Each time a man stands up for an ideal, or acts to improve the lot of others, or strikes out against injustice, he sends forth a tiny ripple of hope… and crossing each other from a million different centers of energy and daring those ripples build a current that can sweep down the mightiest walls of oppression and resistance.”