ACA Implementation: Getting The Word Out

It just shouldn’t be this difficult. I keep coming back to that thought every time I take another step down the road leading to the Affordable Care Act (ACA) implementation. The employer mandate aside, for individuals without insurance (like me), we continue to hunt and peck for information on just how this will all work come October when the health exchanges “go live.” One simply cannot help but think at every stop, imagine if we had a single payer system. If we did, it just wouldn’t be this difficult. No longer would the words eligibility, copay, co-deductible, spend down, and access be part of our health care vocabulary. It could be so simple: Everybody in. Nobody out…just like the rest of the civilized world does it.  But alas, the ACA is what we have, and the ACA road is the one many of us will be traveling. 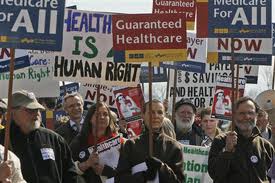 The ACA was designed to help people without health insurance.

I remain fortunate to live in a state embracing the ACA—both in terms of setting up a state-run exchange and in expanding Medicaid coverage for the most vulnerable caught in what is the horror of the U.S. healthcare delivery system. Last week, Keith Ellison, my Congressman, led a town hall meeting to help his constituents learn more. I readily welcomed the meeting and trooped off to see what was being said. Hats off to Ellison’s staff and those from MNsure for having a plethora of handouts ready to go. There it was in black and white: “Who Do I Talk To?” “How The Health Care Law Benefits Seniors and Improves Medicare” “How The Health Care Law Benefits Young Adults and Children” “What You Need To Know About The New Health Insurance Marektplaces”

Overall, however, getting the word out to people about the benefits of the ACA has been almost non-existent. Why, I wondered do the Democrats never mount an effective public relations campaign against right-wing attacks on anything, especially Obamacare. For all of its many faults, the ACA’s primary objective is to provide access to health insurance coverage for the millions of individual Americans who lack it. It’s not about death panels; it’s not about causing small business to fail. It’s about lowering health care costs; it’s about providing access so that many of us who were unable to get insurance before now can; it’s about strengthening consumer protection (remember those rebates we got last year and children staying on their parents’ insurance until age 26). Those are all good things.

The NorthPoint Health and Wellness Center, a multi-specialty medical, dental, and mental health center and human service agency located in North Minneapolis, hosted the meeting. A crowded room of interested constituents greeted Rep. Ellison, who quickly pointed out the difference in tone and nature of this town hall meeting from the one three years ago at the same location during the long, hot summer of 2009 when healthcare reform was first being discussed. Gone were the Tea Party disrupters. They were replaced by anxious citizens eager to find out more about what the ACA means for them.

It didn’t take long to realize that although my story illustrates what’s wrong with our health care delivery system that there are many, many other individuals whose need for access to affordable health care far exceeds mine. Stella West, CEO of NorthPoint, welcomed the crowd and reminded us that their clinic sees more than 23,000 individuals annually, 37 percent of those individuals who do not have health insurance. A good reminder in case anyone needs one: The ACA was designed to help people without coverage. 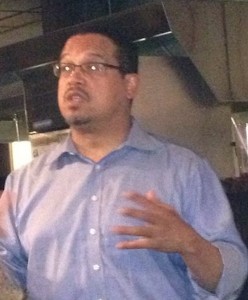 Rep. Keith Ellison working to help his constituents understand how the ACA will help them.

Rep. Ellison noted that this was the first of several ongoing conversations slated for his district. “We need to raise awareness of the ACA and how it will improve the quality of life for many people,” Ellison said. April Todd-Malmlov, Executive Director of MNsure, the state run exchange, followed Ellison. She assured those in the audience that “getting the word out” was one of the top priorities of MNsure. Call centers will “go live” in September to start fielding calls, more informational meetings are scheduled, and MNsure will have “boots on the ground” in 8-10 districts throughout the state holding meetings in libraries and public schools to help inform state residents. And information will be provided in multi-lingual capacity—something of concern to those who serve Minnesota’s large Hmong community. Web sites (both state and national) and phone numbers to call for more information before the exchange goes live in October were also provided. And individuals will be going door-to-door in some communities to talk to individuals.

Patience is not my strong suit, but patience is what I will need until October. For the thing that interests me most will not be ready until October. Information on the health plan offerings and the calculator to estimate costs on the MNsure site will not be active until then. Most of the feedback I received since writing my first blog about my ACA journey was critical of my belief that the ACA would offer me relief from my current monthly payment of $329.21 for a $10,000 deductible policy with Minnesota’s high risk pool. I look at it as having bankruptcy insurance, not health insurance.

Most of the feedback chastised me for my hope in the system. The responses said my rates with the ACA would double, perhaps even triple and that I would long for the days of the high-risk pool (which is being phased out over time in Minnesota).  Although neither Ellison nor Todd-Malmlov could provide a 100 percent reassurance answer on my rates being lower for better coverage, they both reminded me that as a member of Minnesota’s high-risk pool (MCHA) my current rates are set at 25 percent higher than “normal” rates. We won’t know for sure until October.

My favorite question came from a young man who identified himself as a constituent from Republican Erik Paulsen’s district, which neighbors Ellison’s district just west of Minneapolis. The young man asked if there would be these types of learning opportunities offered in the more affluent suburbs of Paulsen’s district. He said he knew of neighbors and friends who had no insurance and who needed the coverage, but who were ignorant of what the ACA offered. He said he was sure Paulsen was not conducting the same types of informational seminars in his district that Ellison was conducting in his. Ellison strongly encouraged the young man call Paulsen’s office and to encourage the Republican rep to hold meetings.

Ellison concluded the evening reminding us that everyone’s help is needed to help ensure ACA success. “We’re here tonight to reach out and we’re asking all of you to take individual responsibility to reach out to others in your community—whether that’s a community with diverse backgrounds such as Hmong, LGBT, or communities of color. We need your help.

“We recognize there will be challenges,” Ellison added. I assure you there will be problems, but we’ve put our energies into making it work. From FDR to Truman to Kennedy to Nixon, and Clinton, we’ve tried to make improvements on health care. This is the first time we’ve succeeded.  And let’s not forget, the ACA was designed for the uninsured. And that’s where it should work the best.”

Employer mandate delays and Republicans be damned. There are approximately 47 million Americans without real access to real health care. If this is the first step to fix that horror, then we have a moral obligation to help get the word out. But the fact remains, it’s 2013 and we are still counting on people going door-to-door to inform people that they may be eligible for health care coverage. In the 21st century, in the so-called wealthiest country on the planet, we can’t provide health care for our citizens—a basic human right.  We should be ashamed.

It’s still difficult not to say: It could be so much easier. Just move to single payer.