For me, watching Bill Moyers’ PBS Frontline “Two American Families” on July 9 brought me to tears. This was literally my neighborhood. I grew up in Milwaukee’s Sherman Park neighborhood, which is where the Stanleys, one of the two families lived. I used to spend my winter days as a youth walking to Sherman Park to ice skate; in the summer to use their public pool. Now, here was my youth, on national television as a living (or dying) testament to the policies and those that supported them and how they have led to the destruction of what was the bedrock of an American middle-class life. 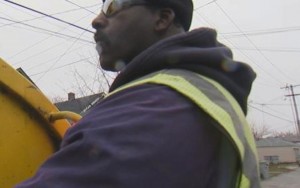 Milwaukee’s Claude Stanley: Searching for the dignity of work.

My father worked at A.O.Smith (the company that laid off Claude Stanley, patriarch of this incredible family). He made frames for General Motors’ cars.  And my brother, before he died, worked at Briggs & Stratton, the company that laid off the female head of the Stanley family and the male bread winner of the Neumann family. The irony and the tragedy of that was overpowering for me. Both my father and my brother were union members. They made living wages and had health benefits (which covered my brother through to his death and allowed him to die with dignity instead of bankruptcy). Both my dad and brother were able to create a “good life.” I always remember my dad saying he never wished he was Henry Ford; he just wanted to make sure he could go to Northern Wisconsin for a week of summer vacation when the Smith plant was on shutdown.

Where did this middle class life go and how did we allow it to happen? In its simplest form: trade policies and a culture of greed, most notably by Wall Street who demands quarterly blood from turnips. My brother would talk till his voice was hoarse about Briggs shipping blue-collar jobs to Southern states and then Mexico and what it represented. It will impact everyone, he used to say in the 1990s.  What white collar techie at Briggs thought that meant his/her job? Hello Bangalore.

Bill Clinton and NAFTA are just as guilty as any Republican. My heart ached as I realized that Claude Stanley, now a public employee for the City of Milwaukee was one of the poor souls impacted by Republican Governor Scott Walker’s attack on public sector workers in 2011. How have we made these people the enemy?  All they want is a job that pays a living wage…someplace to go each morning…the dignity that comes with providing for their families. If anyone hears anyone ever say again that people are on unemployment insurance or welfare because they are lazy, that person should be made to sit down and watch this entire Frontline.

I also found myself getting just as angry at the Roman Catholic priest who brought the Newmanns up to the altar to “rejoice and give thanks” when the dad finally found work.  Anyone from Milwaukee knows the incredible stronghold that the traditional Catholic Church holds on anyone from the “South Side,” where my mother’s immigrant family settled a century ago. I found myself shouting at the TV screen:  “No Father…he now has a job that pays him half of what he used to make.  There’s nothing to rejoice about. Why aren’t you preaching the precepts of Catholic Social Justice teaching and working within your community to stop the greedy CEOs?”

Perhaps the saddest part was Terry Neumann thinking she or her children would find jobs.  There are no jobs in Milwaukee – not living wage jobs that can support families and allow them to dream the so-called American Dream. And what we still call middle-class jobs won’t be there until we as a nation and a people say we are better than this—better than stopping people who want to work and make a living from doing so. This problem was intentionally created and it can be intentionally reversed—if we are committed to caring about how people live.

Where is our outrage? Not only for Milwaukee, but for Detroit, Cleveland, Oakland, and the list of cities that we are leaving to die. And what about medical bankruptcy—which both of these families faced as a real possibility with their mounting medical debt. How can we allow a for-profit health insurance industry to exist when 47-50 million Americans are without coverage?  And don’t think the Affordable Care Act stops medical bankruptcy.  It does not. What local church and political community leaders cry out on a regular basis about the crime that is the American health care delivery system?

Richard Eskow asks the same question in his brilliant piece: Where the Hell Is The Outrage?  “Wealth inequity and other economic injustices are the product of deliberate policy choices — in taxation, Social Security, health care, financial regulation, education, and a number of other policy areas.  So why aren’t Americans taking action?”

Or, take it from a 93-year-old Jesuit priest, Father Daniel Berrigan, and one of 23 progressives featured in our book Wisdom of Progressive Voices who knows of what he speaks when he talks about the need to be in the streets. In a 2012 article during the Occupy protests the article paraphrases Berrigan with the following: There is one place where those who care about justice need to be—in the streets. The folly of electoral politics, the colossal waste of energy invested in the charade of the Wisconsin recall, which once again funneled hopes and passion back into a dead political system and a bankrupt Democratic Party, the failure by large numbers of citizens to carry out mass acts of civil disobedience, will only ensure that we remain hostages to corporate power.”

William Barber and Moral Mondays: We need to embrace this concept 7 days a week.

Perhaps it will be North Carolina who puts the word “moral” back into the conversation. Moral Mondays in Raleigh, North Carolina continue to build in numbers and publicity. If you’re not familiar with them, find out more. Reverend Doctor William Barber is the face of god today, reminding us what moral outrage looks like. Keep your eye on North Carolina to see what happens.