“Fear – in all faiths – is something to be avoided.  It is detrimental and it leads to what I’m calling an ‘unpatriotic lie’ about who we are as a country. The idea that our country is based in individualism, that it’s every person for him or herself and the rhetoric that is evident in the Ryan House Budget is wrong.  It is not who we are as a nation.  It is unpatriotic, and it is a lie. 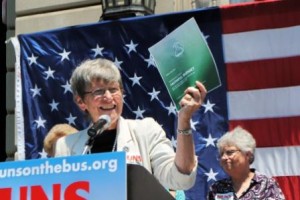 Sister Simone Campbell of Nuns On The Bus: We urged people to speak up, to connect, to talk to one another.

“The foundation of who we are – civilly as well as people of faith – is evident in the first three words of the Constitution – ‘We The People’.  We are in this together.  I think the selling of fear and the marketing of fear is done because when people are afraid it’s easier to control them.”

Those powerful words that cut to the heart of the divide in our country today were spoken with courage and conviction by Sister Simone Campbell, SSS the “driving” force behind the recently completed Nuns On The Bus tour.  The nine-state tour, which ended July 2 in Washington, D.C., was the work of NETWORK, a 40-year old organization with a rich history of fighting for federal policies and legislation that promote economic and social justice. The goal of the bus tour was two-fold: to speak out against the Paul Ryan budget proposal, which favors wealthy Americans at the expense of the poor, and to help build a sense of community among people as a reminder that we are all in the struggle for social and economic justice together.

“We urged people to speak up, to connect and to talk to one another and we tried to tell them we would be supportive if they kept it going.  It’s up to each one of us to contribute.  Therein lays the individual responsibility – to participate.”

The tour not only spoke to the corporal needs of people, but also to the soul of who we are as individuals and as a nation.  Each stop, which was met with great enthusiasm and little push back from either political or religious protest, included a “friend raiser” which allowed individuals the opportunity to connect, converse, and share stories.

“At every stop we met people who cared deeply about our nation who cared deeply about their state and in so many ways were suffering about where we are as a nation.  I was so lifted by the valiant work being done in so many places to remedy some of the problems that exist and at the same time when we went to these “friend raisers” I was deeply aware of how folks in the middle class feel so isolated and so alone, so left out of a sense of relationship.  They were just really hungry for it. Somehow what we did on the bus trip, raised hope for them that was profound.

“I had one women come up to me in Hershey, Pennsylvania, and said if she joined NETWORK, would she receive names of people that it would be OK for her to talk to. That hunger for connection is so real.  People don’t know each other and so often you run into the buzz saw of partisan rhetoric and judgment that people are reluctant to have real conversations with each other.  And that’s something that has gotten much worse over the last 10-15 years.

“One of the reasons we did these ‘friend raisers’ was so that people could follow-up and be in relationship and care about our nation so that we can have reasonable revenue for responsible programs.  We must raise taxes.  That is just a given if we’re going to have anything that is a sane democracy. We went too many years with these incredible tax cuts. We waged two wars that were never paid for and then we’re facing the baby boomers retiring.  And we think we can get away from it without paying for it?”

Fighting for economic and social justice is nothing new for Sister Simone and NETWORK, a 40-year-old organization.

Fighting for economic and social justice is nothing new for NETWORK.  In 2010 they signed on to the support of President Obama’s health care reform and just weeks before the scheduled Nuns On The Bus tour began, the Vatican censured the Leadership Conference of Women Religious and NETWORK for focusing too much on poverty and economic justice while remaining silent on abortion and same sex marriage.  The Vatican’s action proved to be just the catalyst needed for national attention to the bus tour.

“We had an amazing opportunity, Sister Simone said, noting also that the censor came at a time when NETWORK was discussing how to revamp its 40 year old mission and how to get more people to participate.  “We got into this bus trip because I asked for help.  We had a 40-year-old imagination that we needed to look at.  This has been all about the Holy Spirit moving.  It’s way beyond anyone’s control.  Right now I’m trying to be faithful to prayer as we look at what the next steps will be.  We have to stay focused on the Ryan Budget because the discussion and the possibility of what that Budget means is only going to get worse between now and January.  We have to remain vigilant and engaged.

“How do we do that?  We’ll be doing a lot of state-based advocacy working with interfaith communities and talking about our Faithful Budget, which is our alternative to the Ryan Budget.  We will have nun-leadership teams meet with governors and congressional delegations urging them to take care of their people. And we will be doing a lot of work around the Medicaid expansion of the ACA (Affordable Care Act).  I believe it is a sin for states to choose not to expand their Medicaid coverage (which would include health care coverage for those who fall within certain federal guidelines of the poverty level).  This is a pro life issue.”

A native of California, politics and caring passionately about others was at the core of her life’s learning experiences.  “I so admired those who worked in the Civil Rights movement and all they did to fight for integration.

“Jesus is all about justice.  That’s the Jesus I know.  I don’t understand the institution of the Catholic Church.  All those decisions are made at a higher pay level than mine.  I’m just trying to be faithful to the gospel.

“My sense of hope comes from prayer. What I do know is that in all of creation we remain one body. I can only do my part.  I have a lot of ideas, but I know I don’t control the outcomes.  I describe my spirituality as ‘walking willingly’ and by that I mean I don’t have the whole picture; I just try to do my part.  As long as I’m not seduced by controlling the whole thing then I can trust that the Holy Spirit will move.

“The struggle right now is for the soul of our nation.  Are we going to continue to be fearful individuals who don’t look out for one another? Frankly, only rich people can pander to individualism because poor people know you have to work together.  You have to cooperate.  We found much more community among low income people, where our sisters work than even what we found even in our ‘friend raisers’ where we found middle class folks who felt so isolated and adrift.  The response to our bus tour was so overwhelmingly positive.  It was awesome. The $64,000 question of course is, what happens next?”

Listen to Sister Simone in her own words on one of the tour stops in Janesville, Wisconsin.