We’ve flipped the calendar to February. Slowly but surely, we’ll get to November 6, 2018. It may still seem a far off date, but boy are we ready for it! 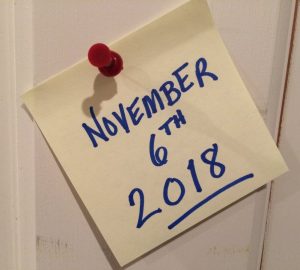 Mark the date in bold and realize how important it is.

Who among us isn’t tired of the daily chaos inflicted by this current administration and its corporate rulers? Day after day another story sends us spinning to find an escape. We keep hoping Robert Mueller and his investigation will free us. Surely something, somewhere, somehow, someone will free us from this madness.

The short answer is nope. That’s not the way we stop this.

The answer has never been more simple or right in front of our eyes. We have the power to stop this political chaos; we are the ones who can take back control; it is up to us to do the one thing that is becoming increasingly more difficult for many throughout this country – vote. We need to flood the voting booths and the polls on Tuesday November 6, 2018.

We have the power to change this mess.

And that message was echoed on hundreds if not thousands of signs in the throng of 300,000. Whether the sign said “Fight For $15” or “Stop Trump/Pence Fascist Regime” or “Abort Trump In His First Term” many of them carried a “sub-headline” that read: Vote. Vote Like Your Life Depended On It. Vote, Vote, Vote…everywhere you looked the message was there.

Make no mistake; it’s hard enough to vote in this country with or without Russian “bots” afoot. It’s been proven that Voter ID laws keep people away from the polls. Voter suppression is rampant in almost every state. Electronic, non-verifiable touch screen voting machines can “magically” flip a vote right in front of a person’s eyes. But we can’t let anything deter us…to stop us from going to the polls in November, en masse. The power is within us.

The unending clatter and noise that will surround us must be blocked out. Stay focused. Don’t listen to any polls (be they good or bad). Talk to your neighbors and make sure they vote. Help get people to places so they can secure the necessary voter IDs, volunteer…do something. Turn off the noise machines and mark November 6, 2018 as big and bold as you need to mark it.

If you need a reminder of just how important these mid-terms are, here’s a great article that lists what’s at stake – besides impeaching a president.

Or as comedian and political satirist John Fugelsang tweeted the other day: Voter Apathy is Facism’s lube.

November 6 – it will come as surely as November 7. Don’t lose hope and most importantly, don’t forget the power is within each of us. Why do you think the Founding Fathers began this whole crazy experiment with the words: We The People….

This entry was posted in Citizens United, Democracy, Thoughts on Life, Voting and Electronic Voting Fraud. Bookmark the permalink.