It’s been almost a year since the state of Wisconsin mesmerized the nation and some say planted the seeds for what ultimately led to the Occupy Wall Street Movement that captured national headlines by the end of 2011.

In February 2011 newly elected Wisconsin Republican Governor Scott Walker announced plans to push a union-stripping bill through the state legislature as part of his budget plan. The bill would have erased years of Wisconsin’s rich progressive political history with the stroke of a pen.  To counter this unprecedented move, 14 Wisconsin state senators made a bold and historic decision to leave the state and deny a legislative quorum. 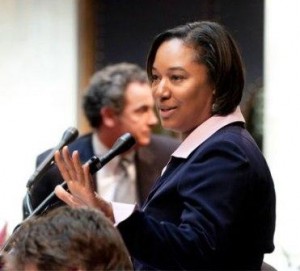 The “Wisconsin 14” as they became known around the country – and the world – slowed down the legislative process long enough for people to better understand the significance of the bill and the huge impact it would have on many Wisconsinites. It also brought thousands of protesters to the streets, culminating in weekend rallies that topped 100,000 on several occasions.

Ultimately the legislation was passed, but the galvanizing energy generated by these Wisconsin senators is a key component that led to the Recall Walker efforts currently underway. The announcement of the recall is expected in mid January after the more than half a million needed signatures are tallied. The voice and action of “We the People” triumphed.

One of the most ardent of the state senators was and is Senator Lena Taylor, who represents Wisconsin’s 4th Senate District, which encompasses parts of Milwaukee, the state’s largest city.

“What gave me hope during that time, when (Senate minority leader) Mark Miller said we only have one option and that is to deny them a quorum, was to see the people of Wisconsin come to the Capitol…first by the tens, then the hundreds, then the thousands,” Taylor said in a recent interview.  “We stayed in Illinois and we looked at all those people and we said, ‘Oh my goodness.  We left to deny them a quorum and they have started a movement.’

“I want to say this with as much humility as I can. I believe our leaving…it gave people an opportunity to see that we too must fight back like that – in America. I would never have thought that going to Illinois could generate that or that we would be and be a part of such a major event.”

Taylor derives her advocacy for social and economic justice from her middle class family roots in Milwaukee.  “Why do I have a passion to serve the way I do…the passion to support those who are the voiceless or the least among us?  It comes from my family, the foundation of how I grew up, learning to whom much is given, much will be required.

Senator Lena Taylor: "I never thought going to Illinois could generate such a major event.”

“It should be a given that you will help others…one shouldn’t ask if you should reach your hand out your hand to help. It’s what I was raised with and what I see everyday. My mom runs a ministry in which she helps those who are homeless. My father is an usher and actively involved in his church, and I’m happy to report that the next generation (my son) is coming up in the same mold.  We seem to have lost that over time to a sense of selfishness…It’s been too much just me, me, me…my, my, my.  I see that in the 1 percent and the 99 percent issues that we’re hearing about today. My favorite quote – from Gandhi is: You must be the change you wish to see in the world.”

Taylor has dedicated her life to contributing back to her community. After attaining a law degree from Southern Illinois University at Carbondale, she practiced as a Public Defender for the people of Milwaukee and eventually opened Taylor and Associates Law Office, a general practice firm in her community.  Taylor still holds free legal clinics in conjunction with Greater New Birth Church in Milwaukee for those in need.

“If you would have told me that I would be a part of such an historical event, I wouldn’t have believed you,” Taylor said recalling the flight to Illinois.  “And, if you would have told me the parallels between the fight and the struggles we are facing today to those efforts made 40 years ago with Martin Luther King and others were marching for workers’ rights, I would have said we would never be going backwards like that.  Or that we would be fighting for the same voter rights that Ezekiel Gillespie and others fought for, I would never have believed it.

“I would say my strength comes from my relationship with God. My prayer life and my faith in the people of Wisconsin is what I look to.  The people of this state have been phenomenal and relentless in their quest to say who we are. A half a million people have signed the recall petitions:  That’s not all Democrats. That’s not all people of color. That’s not all urban.

“As a woman of faith, there have been times I’ve been overwhelmed. I say to myself, I can’t believe they (the governor or the state legislature) did this or they did something else.  But what has motivated or encouraged me not to give up is realizing what the consequences of their choices would be if I chose to do nothing.  I didn’t want to be on the side of history that remained silent.”

Her hope for the future of her state and the nation goes far beyond the Recall Scott Walker efforts.  Although she cannot hide her enthusiasm at the thought of replacing the governor, she sees a bigger need to help heal the state and the country.

“What I hope for more than anything is a restoration of a bipartisan way…that we do things to get solutions to the problems we face today. Compromise is not a dirty word. It is an expectation that is demanded by the people…for the people…by their representatives.”