“Blessed are the peacemakers.”  We all know that phrase from the Bible, the Beatitudes.  But how many of us center our personal, much less our professional lives on working to create a world in which peace is the dominant factor.

It’s not hard to argue that the word “peace” has somewhat disappeared from the national conversation. Drones, guns, war, military intervention, political polarization, bullying, hate talk.  But for Sister Patricia Chappell SNDdeN , Executive Director of Pax Christi USA, peace and what it means in the 21st century is the cornerstone of her daily personal and professional life.  (See sidebar below for more on the work of Pax Christi USA.) 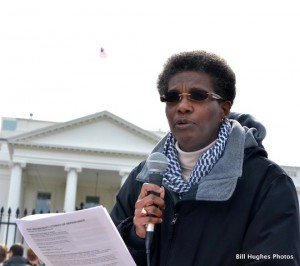 Sister Patty Chappell: Speaking at a rally at the White House.

“We may not be using the actual word ‘peace’ in today’s social justice and peace movement, but all of our efforts are centered around trying to provide peace and to bring peace in a non-violent way,” Chappell said in a recent interview with Wisdom Voices.

“Our four foundational principles are our priorities,” she said.  “And one of the things we found as Pax Christi USA moved into 2013 is that we needed to go back and to look at those priorities.  We needed – as a staff and a council – to go back and say, what do those principles mean to us when we say we are peacemakers.

“We need a sense of how that word is rooted in us before we can make it plain to the people in the pews.  We can speak about spirituality, and disarmament and economic and interracial justice and human rights and it becomes so abstract that often times the people on the street and in the pews don’t have any idea of what we’re talking about.  So one of the things we are trying to do is look at if we’re going to talk about a spirituality of non-violence, what does that mean to us.

“As I’ve traveled the country, we have also tried to ask, ‘how is what we are doing rooted in the Beatitudes?’  I think people are then able to look at those Beatitudes and concretely look at ways on how they can be implemented in their personal lives, in one’s family, in one’s neighborhood, and hopefully the nation.  That’s a much better way to look at peacemaking than just saying we are peacemakers.

“When you look at it from your own personal lives, it can lead to a conversion and transformation (for peace),” she added.  “It may sound simple, but it’s hard work. It’s work to stay on top of issues. It’s work to try to understand all aspects of an issue and it’s work to allow yourself to be prayerful and reflective on what one needs to do to change one’s own attitudes and behaviors. But that’s where it has to begin.  It has to start with an individual conversion and transformation, and then it spreads.”

The prioritization and refocus on the four foundational principles of PCUSA are the driving force behind much of the organization’s work.  The principles include:

1.  Spirituality of Non-Violence and Peacemaking.

“Certainly there are all kinds of violence that continues to take place in our world both on international and domestic level,” Chappell said.  “From our perspective we are trying to say that peace can only occur initially if one is open within themselves for their personal transformation to happen.  Once that personal transformation happens, one becomes deeply steeped in the fact that we are each other’s keepers and if you truly believe that then what you begin to do is collaborate with others of that mind set.  And so then you become committed to how do we approach the issues, which certainly means being active, vocal, and calling for reform – but doing it in a non-violent way.”

“What that means is that we believe in non-violent alternatives to war as a way of life,” Chappell said. “It makes sense to people that when there is conflict, we do not have to go to war – that we are always looking for alternatives to how can we resolve differences and disputes and conflicts.  Whether it’s in families, dealing with children in schools who are being bullied or around the issues of drones. It’s our belief that we want to collaborate on a national level to say we do not believe in war.  We have to put our faith into action.  We need to call on our government and join with others to call for drone reform; to call for the closing of Guantanamo and to look at providing aid and humanitarian opportunities to Syria – and to work with the UN to make sure that it comes about.”

3.  Economic and Interracial Justice in the United States.

“We are committed to dismantling racism and to guaranteeing the equality of all people because we believe in the Social Justice teachings of the Catholic Church and their transformative action which is rooted in the gospels,” Chappell said.  “For us who are Christian you have to look at the common good.

“Racism still exists – people want to say it doesn’t, but institutional racism exists.  What we’re trying to do is specifically partner with our members of color and communities of color to work together on how to solve these issues. 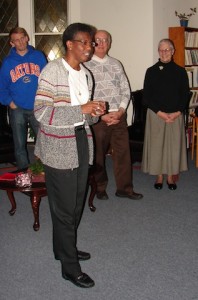 Sister Patty Chappell: Individual conversion to a life of peace leads to transformation.

“We here at Pax Christi USA are still struggling with how do we implement this.  We know that for years PCUSA has been a predominately white, male Catholic movement.  In order for us to become more authentic we have to allow the universality of the Church to enter into PCUSA. We must realize whose presence has ben missing in our organization and begin to aggressively invite people of color to look at PCUSA and to partner with us to move towards economic and racial equality. PCUSA has an anti-racism team which has existed for 10 years and one of their missions is to help us look at our policies, practices and procedures to make the necessary changes to dismantle the racism that exits among us. It is a struggle and a challenge.

“We believe in the reverence of all creation and the dignity of all of our sisters and brothers at home and abroad.  We need to address those issues in which there are human rights violations whether it’s at Guantanamo or supporting the Plowshares 3 or calling attention to our climate. We need to be active in those issues that call for reform and   always keeping in mind that we are trying to act in a non-violent capacity.”

For example, in January 2013, Pax Christi’s web site features petitions and actions that call for the closing of Guantanamo, connections to Pax Christi International and its work with calling for humanitarian (not military) aid to Syria and reflections of Martin Luther King, Jr. and his work to break down racism, militarism and consumerism.

For Chappell, a native of New Haven, Connecticut, who was born, raised and educated as a Catholic, she remains hopeful in her commitment to making the world a more peaceful and just place.  A licensed social worker, she has spent much of her 36 years in her community of the Sisters of Notre Dame de Namur working with those in the most abandoned and oppressed places in the country.

“Being African-American, I have experienced marginalization, oppression and racism,” she said.  “I believe there is a commitment on the part of PCUSA to look at how do we best become an anti-racist multi-racial Catholic peace movement.  We need to have the universality of the church represented; those voices must be included at the table and in the decisions we make and the programs that we offer.  I believe PCUSA has stated that on paper and shown a willingness to move toward that.

“I have a strong prayer life and I surround myself with other people who believe strongly in the fact that we are trying to create a world that is just. Having that support group is important.  Otherwise it can become more like, ‘Oh God, please come to my assistance.’

“What has been energizing and uplifting has been the opportunity I’ve had to visit the constituents in our regions.  The young adults, the youth and children who are committed to wanting to make a better world for all continue to energize me.  I leave those gatherings with a sense of hope.  I’m fired up because it says to me that with listening and with dialogue, we find that we have many things in common.  There is a sense of being able to move forward.”

Pax Christi USA:  Keeping Peace and Justice In The Conversation

2013 began with a keen awareness of trying to keep the national conversation focused on peace and social and economic justice.  Sojourners magazine’s January issue was devoted to A Heart for Peace.  And The Progressive magazine combined its December-January issue to “Living our Values.”  As we move deeper in a year that will present challenges to a commitment to social and economic justice, the work of those focused on peace cannot be understated.

Pax Christi USA is a section of Pax Christi International, the Catholic peace movement.  Their web site offers great detail on the work and educational programs offered and listings of the regional chapters.   Their resources section provides brochures addressing the issues of our times with reflection, quotes, action ideas, and prayer.

Whether it’s work on nuclear disarmament, protesting the School of the Americas, or protesting the escalation of drone attacks, Pax Christi USA continues to offer alternatives to violence and war.  For more information on the organization, click here.