Last night it was just plain fun to be a progressive.  It was the 9th annual Blue State Ball here in Minnesota and progressives from every corner of the state gathered in Minneapolis to celebrate the diversity and inner joy that abounds when progressives gather.

Hats off to Janet Robert, president of AM950, the independent progressive radio station here. Her vision and courage to start progressive talk in the middle of the George W. Bush presidency has been nothing short of remarkable.  And every year she invites us to come celebrate with her and the progressive talkers who broadcast on the station. 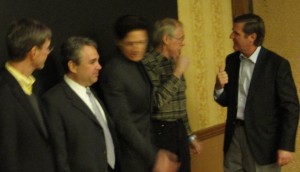 Mike Papantonio talks with one of hundreds gathered for the Blue State Ball. Left to right: Thom Hartmann, Norman Goldman and John Fugelsang.

Headliner Ed Schulz revved up the crowd by acknowledging their anger and disappointment with Harry Reid’s lack of leadership to bring real filibuster reform.  And he reminded the crowd that the journey continues and to never underestimate the omnipresent GOP and its shenanigans.

Ring of Fire host Mike Papantonio received a standing ovation and it was evident from the sheer delight on the face of this Florida resident that the first-timer to the Blue State Ball was greatly enjoying talking to a packed house of hundreds of energized progressives.  His message remains constant:  The cavalry isn’t coming.  It’s up to each of us to do our parts to fight back on the countless assaults on democracy from all sides.  His take down of Republican governors who are now out to change the Electoral College rules on how we elect a president was no less sharp than was his laments over the lack of prosecution of Wall Street bankers by the current Department of Justice.

“What struck me in the president’s inaugural address and what I heard is that President Obama thought everyone could do a little bit of something to help America become the best it could be,” Papantonio told the crowd.

Papantonio reminded the crowd of the story of Harriet Beecher Stowe  — who wrote Uncle Tom’s Cabin, which reshaped the entire country’s thinking of slavery. Papantonio then urged those gathered to abandon the idea that people in power are somehow better than us.  “Everyone has the capacity to be Harriet Beecher Stowe.”

The always wise Thom Hartmann (where does he find the time to write all those books), Norman Goldman and John Fugelsang (from the Stephanie Miller Show) charmed the crowd.  But, in Minnesota, at the Blue State Ball, it was once again Democratic Governor Mark Dayton who deserved honors for the night. 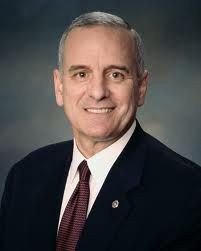 Dayton, not known as the most comfortable of public speakers, took great delight in spending part of his 66th birthday with those who helped to elect him to the governor’s house in 2010.  And Minnesotans continue to realize just how important his close win was.  Without Governor Dayton, Minnesota would have become Wisconsin, Pennsylvania, Ohio, Michigan and Florida – states who went all red in their statehouses with the 2010 elections.  It was only Dayton’s razor-thin, recount win that separated the Land of 10,000 Lakes from the others.

The former U.S. Senator may have saved his finest political hours for his role as governor and he thanked the crowd again for the work Minnesotans did to defeat two constitutional amendments the Republicans pushed through the legislature and on to the 2012 ballot (voter photo ID and a ban on same-sex marriage).

For me, the best thing about the Blue State Ball is always the great diversity in the crowd.  Every size, shape, race and creed of Minnesota progressive shows up to laugh, dance and celebrate.  Inclusion and inter-connectedness is everywhere.

“Look at the demographics here tonight,” Papantonio shouted to the crowd.  “That’s what makes us winners.  How do you (the Republican Party) alienate everyone and expect to win?”

Saturday night it was great fun to be a winner, a progressive and living in a Blue State.

This entry was posted in Thoughts on Life and tagged Blue State Ball, Mark Dayton, Progressives. Bookmark the permalink.