“Of all the forms of inequality, injustice in health is the most shocking and inhuman.”

Anyone who has read us, followed us, or interacted with us since we opened our doors as Wisdom Voices Press, knows we have been strong advocates for a single payer health care system in this country. We have written extensively about it; we have supported candidates who pushed for it; we marched in support of it; and we have tried non-stop to educate others about it through our blogs and interviews. Click here for a complete list of our features and interviews. 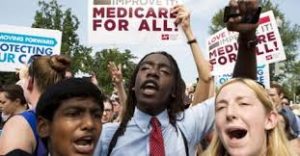 A single payer or “Medicare For All” healthcare delivery system is the only viable plan.

We watched the dreadful display in Washington over the past six months as Republican elected officials tried to take health care access away from millions (thankfully, losing in the end). Now, it’s becoming clearer each day that the next stop on the U.S. health care delivery train will be single payer. Single payer, which guarantees health care as a human right, as done in every other educated country on the planet.

Oh, it won’t be without continued struggle (far more than should be needed for the obvious answer to our current fractured health care delivery system that leaves so many uninsured and underinsured). Single payer advocates watched as a promising effort to implement a “Medicare For All” policy in California recently failed after both Democratic houses of the legislature passed it. The Democratic Speaker of the House, refused to move the bill forward for a vote. It’s come close in Vermont too, but was never able to get over the finish line. Corporate controlled (state and national) representatives from both parties run from talk on single payer faster than just about any other topic.

But today, those who used to complacently smile at single payer advocates as if to say, “silly you, it will never happen” or those that hem and haw about tweaks to the current system, know as well as the heads of the for-profit insurance companies – single payer is on its way. Single payer is now predicted and supported by the likes of former President Jimmy Carter to billionaire Warren Buffet. And Representative John Conyers, who has introduced single payer legislation for years with his HR 676, has seen a flurry of his Democratic house members cosign the bill this year.

Currently, 60% say the federal government is responsible for ensuring health care coverage for all Americans, while 39% say this is not the government’s responsibility. These views are unchanged from January, but the share saying health coverage is a government responsibility remains at its highest level in nearly a decade. 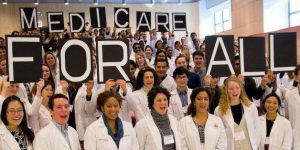 Then there’s always common sense. What else is left? The Affordable Care Act after all was the Republican Plan. Formulated in the Richard Nixon era, developed by the Heritage Foundation, and implemented by Governor Mitt Romney in Massachusetts. Or ask yourself, why do we have insurance companies? Are they doctors, nurses, physical therapists, mental health providers? No, they are middlemen and nothing else.

Similar to every other social-change legislation, the push will not come from the top down. It will be up to the grass roots to demand it and to elect candidates committed beyond measure to implement it. So, we recommend that you learn as much about it to educate others about what it is and what it isn’t.

Or to quote that old advertising slogan: You’ve tried the rest; now try the best.

There is no better starting point than Physicians For A National Health Program’s web site. Their opening paragraph: “Single-payer national health insurance, also known as “Medicare for all,” is a system in which a single public or quasi-public agency organizes health care financing, but the delivery of care remains largely in private hands. Under a single-payer system, all residents of the U.S. would be covered for all medically necessary services, including doctor, hospital, preventive, long-term care, mental health, reproductive health care, dental, vision, prescription drug and medical supply costs.”

Read HR 676 and urge your congressional rep to sign off if they have not yet done so.

Know the difference between the “public option” and single payer. Read what National Nurses United’s RoseAnn DeMoro has to say on that topic.

Watch FixIt: Healthcare At The Tipping Point and engage your local business leaders to push for single payer as an economic necessity for their business.

Engage, engage, engage. It’s up to us to be the change we want to see. We started in January with the Women’s March and have continued non-stop with healthcare demonstrations and showing up at town halls. Don’t stop. Democracy after all is about We The People, not We The Corporations. Read LeeAnn Hall’s (People’s Action) piece on how people, not politicians, beat the healthcare repeal bill. 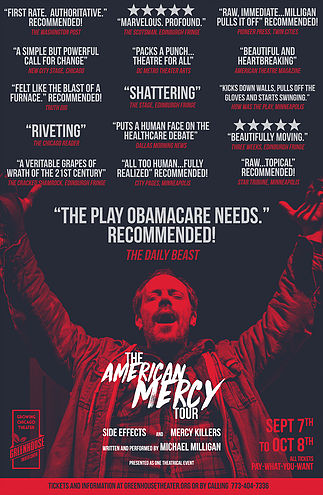 One of the great benefits of working within the single payer advocacy movement is meeting and getting to know the great people who will never give up until “Medicare For All” is enacted in this country. One of the best of the best is actor Michael Milligan. His award winning play, Mercy Killers, and his newest venture, Side Effects, takes a look at changing hearts through dramatic presentation and story telling.

He has now combined efforts into the “The American Mercy Tour” which will be playing in Chicago September 7 through October 8 at the Greenhouse Theater Center.

When we first talked with Michael back in 2012 as Mercy Killers was premiering, he told us: “I was trying to take what people read or what they see in the news about health care but I wondered how do you translate that to the human component so that it would really spark their empathy and outrage (at our current health care system).”

In Mercy Killers, Joe, a blue-collar red state auto mechanic, faced with his wife’s failing health must grapple with the stark divide between his values and his reality. Pushed to the breaking point by debt, disease and a busted system, Joe must decide what compromises he will make to keep his wife alive. Mercy Killers is all at once a tender love story and an unblinking look at those the system leaves behind.

Flipping to the other side of the stethoscope, Side Effects follows William, a family practice physician on the brink of burnout. Caught between his ambition to become the healer his father once exemplified and the corporatization of his chosen profession, William must reconcile the art and business of medicine, or be forced to lose his practice. In this Chicago premiere, we see the human side of those who heal us, throwing light onto the turmoil that remain out of sight from the examination table.

If you’re in the Chicago area or have friends or family there, these plays offer a way to begin the conversation with anyone on the need for healthcare as a human right. For more information, click here.