Hope For A Depressed Nation: Then & Now

A recent trip to Itasca State Park, in the great state of Minnesota, prompted many thoughts back to the days of the Civilian Conservation Corps, a federal government program started by President Franklin D. Roosevelt in 1933 amid the worst times of the Great Depression. Positive CCC impacts fill this park at every turn, including the Welcome Center with its great exhibits and nod to history. Without the CCC, where would this park or thousands of other national and state parks be? 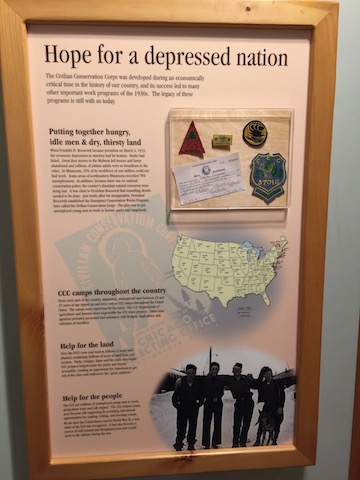 The Welcome Center at Itasca State Park provides visitors with a great history lesson on the CCC.

Can’t remember exactly what you learned in junior high history about the CCC? As our country once again faces the ravages of destruction to our natural resources and the incredible forces of climate change, what better time to reflect on when we had leadership and willing hands to build “hope for a nation.”

Here’s a short refresher on FDR and the incredible work of the CCC.

FDR established the CCC by executive order on April 5, 1933 shortly after his presidential inauguration in March. It came as no surprise that Roosevelt would focus on something that blended his love of nature with a program designed to put idle hands to work for the common good.

Roosevelt grew up surrounded by outdoor activities, which generated a love of water, forestry, and ornithology. In 1912 as a New York state senator, some of his first legislation introduced centered on bills concerned with forestry and hunting and fishing regulations. In the 1920s, Roosevelt directed conservation camps for boy scouts. And Roosevelt’s slim margin of victory for the New York governor’s seat in 1928 is often credited to his outreach to upstate and rural districts. Some suggest that without farmers, riverkeepers and conservation-minded voters pushing Roosevelt, he probably wouldn’t have been elected governor.

“The forests are the lungs of our land,” Roosevelt once said. And he referred to the CCC as not merely relief workers, but as an army of land healers. In his speech announcing the CCC, Roosevelt said:

“More important, however than the material gains, will be the moral and spiritual values of such work. The overwhelming majority of unemployed Americans, who are now walking the streets and receiving private or public relief, would infinitely prefer to work. We can take a vast army of these unemployed out into healthful surroundings. We can eliminate to some extent at least the threat that enforced idleness brings to spiritual and moral stability.” 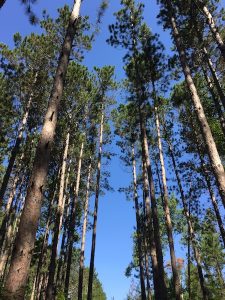 Within three months of its creation, the Corps had enlisted nearly 250,000 young men. They were assigned to CCC camps around the nation. During its nine-year existence, the CCC employed nearly three million young men. It planted over two billion trees, fought forest fires, built trails, campgrounds, and reservoirs, and aided with soil conservation programs. The CCC became one of the New Deal’s most popular and successful programs.

The CCC was considered to be the greatest peacetime mobilization ever of American youth. CCC workers were taught four basic skills:

The CCC was responsible for the recreational building of the Shenandoah National Park as well as for the preservation of the Joshua trees in Southern California. CCC workers helped to stop shoreline erosion in the Carolinas, and every state in the nation benefited from their work. In Utah, for example, CCC projects included improving grazing conditions on rangelands, conserving water, controlling rodents and constructing hundreds of miles of fences and guardrails along large water diversion damns. The CCC was crucial to establishing the first state parks in Virginia, West Virginia, South Carolina, Mississippi, and New Mexico. 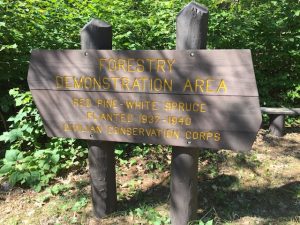 They built service roads, sewers, water and electrical systems, bridges, footpaths, restrooms, and new campgrounds. In Itasca State Park in Minnesota, for example, the CCC built the beach at the public swimming area by bringing in the sand (how in the 1930s does one bring in enough sand to create a beach?) and placing it on the ice covered waters in the middle of winter. Then when the ice melted in spring, the sand sank and created a beach still in use today.

Eleanor Roosevelt, greatly dissatisfied that women were being kept out of the CCC, fought mightily for female workers to be part of the CCC. But only 8,500 women participated in the program from 1933-1942, compared to the nearly three million men. Similarly, Native Americans and African America workers were included, but at disproportionate numbers.

As the U.S. moved into wartime activation in the 1940s, the CCC camps came to a close with little fanfare. Yet the work done by the CCC workers in public forests and parks remained as a proud reminder of what we can do when we pull together for the betterment of our species and the world in which we live.

Even FDR’s CCC alone cannot fix the planetary environmental crisis we face today. We were warned decades ago about the ravages such as Hurricane Harvey that awaited us – and we chose to ignore them. But by remembering the past efforts of those like the young men and women of the CCC, we can find our own story to create for the 21st century protection and enrichments of our lands.

We do not have to sit idly by as we watch what is going now with the White House’s efforts, led by Interior Secretary Ryan Zinke, to reduce the size of our national parks and open them for mining and drilling in Utah and Nevada. Nevada Senator Martin Heinrich recently urged rejection of this plan, noting, “These national monuments were the culmination of decades of advocacy from a broad coalition of local businesses, sportsmen, tribal and Hispanic leaders, veterans, faith leaders, and many other community members across New Mexico who have long recognized the national treasures in their backyards and knew they should be conserved for future generations to enjoy.”

Hunters can play an active part to help preserve our land. In a recent article bemoaning the pheasant-hunting outlook in South Dakota it was noted: “South Dakota’s biggest challenge to remain a mecca for visiting ring-neck hunters is to halt conversion of grassland into cropland. A study found 1.84 million acres or about 37 percent of the grassland pheasant habitat in the state were lost primarily to conversion to cropland from 2006 to 2012.”

Take a look for example what they are doing in London. Planting trees, not only good for the environment, but good also for the economy.

What would a CCC look like in the 21st century? Different of course, but the core elements would remain the same. It would teach us the importance of conservation; our inter-contentedness to all living things; a respect for nature.

We have seen great outpouring of our generosity of spirit to help those in need after the ravages of Hurricane Harvey. But there is another proactive way we can help our fellow citizens. Pay attention, fight for the environment, and tell the stories of the past to remind people that yes, when we come together for the common good, we do great things. We owe it to FDR and the CCC to keep the flame of hope alive in the 21st century.

Listen to a brief recording of FDR’s CCC speech:

A Great Resource For Finding Out More

In addition to making sure you read brochures and displays at your state and national parks about the great work done by the CCC, we encourage you to pick up New York Times’ best selling author Douglas Brinkley’s tome, Rightful Heritage: Franklin D. Roosevelt and the Land of America. 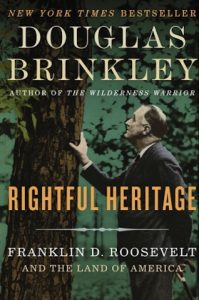 The book focuses on FDR’s great love for the natural world, which started in his youth and followed throughout his political career. Wildlife restoration, emphasis on the national parks, soil conservation, migratory bird protection, hunting and fishing conservation – and dare we forget the duck stamp. All of these are FDR’s conservation and ecology legacy.

It covers more than just the CCC (although the book serves as a great chronicle of this important program). Described as an “epic chronicle,” Rightful Heritage presents a unique portrait of FDR and “illuminates the tension between business and nature – exploiting our natural resources and conserving them.”

A great read for anyone interesting in “learning more about it.”