You Learn Something New Every Day

I was surprised this morning when I saw “The British Clare Hollingworth Award” account retweet a retweet of mine. (Boy, how news travels these days). The originator of this activity was the industrious David Sirota, the Senior Editor for Investigations at The International Business Times. Sirota is one of the last bastions – for those of us old enough to remember – of what real investigative journalism looked like.

Sirota had tweeted the following:

The team I work with is very small — just me and 3 reporters. We don’t do hot takes. We do original reporting. Here’s our work over just the last 12 days. I am proud of our team — we focus on breaking real news. These are stories you could find nowhere else. I am tired. Onward.

I simply retweeted with the comment: This is the way #journalism used to be before #corporate takeover #ThankYouForYourService

One becomes more eager to discover who she was when the headline: The Correspondent Who Scooped the World pops up. In a day and age when women’s voices are becoming stronger and the need for independent journalism has never been more acute, we are happy to pass along a bit of information on this incredible journalist and invite you to go deeper and find out more (see links below). It was even more amazing to learn Clare just recently died on January 10, 2017 – at the age of 105.

In the first week of her career at the British newspaper the Daily Telegraph in 1939, the then 27-year-old Hollingworth broke the news that World War II had started. The Telegraph later recalled:

She witnessed the outbreak of the Second World War on September 1, 1939 when, as a novice Daily Telegraph stringer, she was woken at her hotel in the Polish town of Katowice by the sound of anti-aircraft fire aimed at German bombers.

Opening her window to hear the roar of bombers overhead, she rang the paper’s Warsaw correspondent Hugh Carleton Greene; he was assured by a sleepy official at the foreign ministry that it must be an exercise because talks were still going on.

Next she rang the second secretary at the embassy: “The war has begun.”

“Listen!” she commanded, holding the receiver outside the window. “Can’t you hear it?”

In the year leading up to the start of World War II, Hollingworth was in Poland arranging the evacuation of more than 3,500 political and Jewish refugees to Britain, earning herself the nickname “the Scarlet Pimpernel” from Britain’s press. Hollingworth had saved thousands of lives by regularly circumventing British immigration bureaucracy, which due to its heavy vetting process would have left many in the clutches of the Third Reich.

In a male-dominated profession in an era that witnessed women being pushed “behind the lines,” she continued to report from nearly every European and African front during World War II, and she went on to cover the Algerian War (1954–62) and the Vietnam War (1954–75). In 1963, reporting for The Guardian, Hollingworth unmasked Kim Philby as a Soviet agent, and 10 years later she opened a Beijing bureau for the Telegraph.

Her professional determination to dig out world news – from war-torn Europe in the 1940s to Mao’s isolate China in the 1970s – was complimented with compassion for the sufferings of humanity. I dare say, where today in the corporate controlled gate-keeper world of today do we hear that?

It was said of Hollingworth at her 105th birthday celebration: “Clare is a prodigy, one of those extraordinary people who has not recorded history but helped to make it. She was a pioneer among women journalists, and among the first generation of women war correspondents, who proved that they needed no example from men either in reporting gifts or courage.”

Today we mourn the loss of independent journalism around the world perhaps best exemplified in the U.S. by the failure of a strong, impartial corps of journalists who allowed the joke of a 2016 presidential campaign to flourish. For the myriad of reasons given for an election cycle from hell, one cannot understate that one of the key reasons was the breakdown of a functioning, independent media. The failure of basic independent reporting – drowned out by the likes of corporate media giants such as The Washington Post, The New York Times, Fox News, CNN, and MSNBC gave us entertainment and gossip for the majority of the primaries and general election rather than the desperately needed reporting on issues that mattered. With strong independent journalism we would never have heard the term “fake news.” 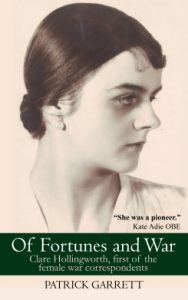 In honor of Hollingworth’s memory, we invite you to “read more about it” and recall a time when journalists brought us a far more honest view of what was happening on local, national, and international fronts.

And we encourage you to support the efforts of those trying to revive independent journalism – such as those exemplified by Sirota – so that when these bastions of the Fourth Estate become “tired” they have the ability to move “onward.” You can find out more about Sirota’s work by clicking here. David’s twitter account is: @davidsirota

This entry was posted in Democracy, Thoughts on Life and tagged Clare Hollingworth, Journalism, media. Bookmark the permalink.