Fighting Bob Fest North: The Progressive Voice Will Not Be Silenced

I love my native state of Wisconsin.  And I will bear with her as she goes through this schizophrenic part of her history.  As difficult as that may be.  This week was another case in point.  Wisconsin is home to some of the deepest progressive roots in this country:  Fighting Bob LaFollette and the birth of the Progressive Party; Senator Gaylord Nelson, who founded Earth Day; and a state history of voter inclusion that is unparalleled around the country.  That was of course until last Thursday (May 12).

The now Republican controlled legislature and radical right-wing Governor Scott Walker pushed through voter suppression legislation that will now make it incredibly difficult for legitimate voters in Wisconsin to cast their votes.  My heart sank on Friday when I contemplated what that meant.  I’ve asked myself the same question dozens of times since last November:  “How could so many Wisconsinites have fallen for the snake oil that these Republican salesmen were pushing?”

Then came Saturday (May 21) and the first ever “Fighting Bob Fest North” in Chippewa Falls, Wisconsin.  The perfect antidote for what happened in the Wisconsin legislature last Thursday.

Many may be familiar with the Fighting Bob Fest that has been held every September in Baraboo, Wisconsin for the last nine years.  The annual event provides citizens with a forum for democratic participation where frustrations with current policiescan be constructively molded into calls to action. The event has grown to the point where this year’s gathering will be held indoors in Madison with an expected attendance of 10,000.  The success of this wonderful gathering prompted an expansion into other parts of the state and thus, the inaugural Fighting Bob Fest North.

So, this past Saturday, after Walker and the current power grabbing Republicans dealt another blow to Wisconsin’s rich heritage of “forward thinking,” hundreds gathered in a small northern community for the inaugural Fighting Bob Fest North.

Saturday’s event featured great speakers, including U.S. Congresswoman Tammy Baldwin and former U.S. Rep. David Obey.  Just as encouraging were the great new voices that included John Bonifaz (Free Speech for People), Mike McCabe (Wisconsin Democracy Campaign) and Kaja Rebane (South Central Wisconsin Move To Amend).  This trio energized those gathered for a workshop designed around the efforts to amend the U.S. Constitution to state that corporations are not people and that money is not speech.  Listen to any interview Vermont Independent Senator Bernie Sanders gives these days, and almost all of them end with a statement from him about his desire to amend the constitution on this issue.  It’s a legitimate movement underway around the country. 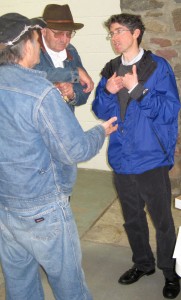 To borrow from Thomas Paine, these are times trying the souls of many in Wisconsin and around the nation.  Sometimes it may seem as though the odds are too great and the forces too strong to overcome.  But you’ll never convince those who gathered at the Fighting Bob Fest North of that.

Is the task difficult?  Yes.  Will incredible hard work and organization be needed?  You bet.  Will the progressive movement ever be silenced?  Not a chance.

For this attendee, the Fighting Bob Fest North was a reminder:  Wisconsin (and hopefully the nation) will work its way through these conflicting times.  The message on how to get there was clear, perhaps best articulated by one of the exhibitors whose booth regarding alternative energy encouraged people to Start somewhere.

And that somewhere begins with each of us.  Grassroots is still the power the corporations and the plutocracy can never take away.  Grassroots organizing and individual action remains the greatest power there is.  Or to quote that great progressive/activist Dorothy Day: “No one has a right to sit down and feel helpless. There’s too much work to do.”