Minnesota Peace Project: A Model For All 50 States

“The Minnesota Peace Project is the definition of outside the beltway peace advocacy at its finest….I know I say it all the time but I’ll say it again—it’s a model that should be emulated in every state!!”

Perseverance. Organization. Passion. Commitment. They are the definitions of grass-roots organizing and the descriptive words that tell the story of the formation and continuing efforts of the Minnesota Peace Project.

Founded in early 2009, the Minnesota Peace Project’s (MPP) mission is to build a more peaceful world by influencing U.S. foreign policy through the exchange of perspectives and information with Minnesota members of Congress. With volunteer coordinators in each Congressional District and two Senate teams, MPP seeks to develop long-term, respectful relationships between constituent peace advocates and their Congressional representatives and staff members.

Sound like a daunting task? It’s what fuels the day-in and day-out work of both MPP co-founder Roxanne Abbas and Minnesota Third Congressional District Coordinator Linda Thomson, both of whom recently sat down with Wisdom Voices to talk about their work and that of the organization. 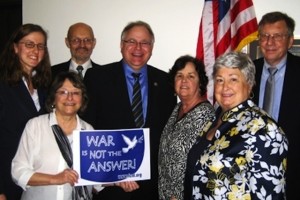 “I was not active in the peace movement until President (George W.) Bush announced the invasion of Iraq (2003),” Abbas said. “I tell people it was President Bush who recruited me for this intense involvement. I’d worked with other peace groups in the past, but from my perspective none of them was really working effectively to influence their members of Congress.

“These groups do a wonderful job with demonstrations and protest rallies and public education. But what I felt they weren’t doing effectively and what needed to be done was communicating with our members of Congress. So, I talked with co-founder Mary Hinz and others who were interested and agreed with this perspective and we pulled together a core team to get MPP started.”

“We developed a strategy to find ways to avoid former techniques where we had failed to influence our members of Congress and looked for ways in which efforts could be productive and where we would have the potential to change their positions,” added Thomson. “We recognized the importance of having a strategy.”

MPP developed a mission statement, and most importantly a Peace Agenda with the help of peace activist Jack Nelson-Pallmeyer and established their agenda into three major topics:

Peace is not a partisan issue. Thomson with her representative, Republican Erik Paulsen.

With agenda and mission statements in hand, MPP then organized into establishing local volunteers and members in each of Minnesota’s eight congressional districts and two Senatorial teams. “You can only be on a Congressional district team if you’re in that district,” said Thomson, who has a background in marketing. “We recruit with endless phone calls and networking. It’s in talking to people you’ll find out that they say, ‘Oh, I know someone who just moved to Morris (Minnesota) and then we call that person and say, ‘Do you know anyone in your district who would be interested in helping.’ It’s constant work. And it helps to be willing to talk to anyone at anytime.”

“I’ve been at conventions where I walk into other people’s party rooms and just start talking,” Roxanne laughed.

But it’s far more than just talking that has been the real nugget of success for MPP. It is in the art of listening and using the tool of dialogue in which the organization has fine-tuned its work with the Minnesota congressional delegation, which ranges from Progressive Caucus co-chair Keith Ellison (Minnesota 5th District) to staunch Republican Erik Paulsen (Minnesota 3rd District).

“Instead of going in and ‘preaching or arguing’ about what’s needed to be done to prevent outbreaks of violence around the world, we needed to find out what was before Congress; what were they talking and thinking about and what were their pressing issues,” Abbas said. “In effect, they taught us to do it that way. They didn’t have the time to think about the long-term. We had to adapt to where their heads were, what they knew they were going to vote on or what they were being asked to sign on to in a letter.”

“They really can’t know everything about everything,” Abbas added. “It’s up to us to educate them. For example, Rep. Erik Paulsen doesn’t sit on any foreign relations or military committees. When we first dealt with him we would come away critical because we felt he didn’t know much about our priority issues. And then we came to understand—he needs to be educated and made aware and current on issues that relate to peace initiatives.” As we’ve brought more and better information to meetings he’s become more receptive, listens well, and asks questions. “

“We continue to try to understand where each member of Congress is coming from,” Thomson added. “We don’t generalize about all 10 (Minnesota) members of Congress (eight representatives and two senators). It’s how to most effectively work with, for example, Senator (Amy) Klobuchar or with (Rep.) John Kline (Republican, Minnesota 2nd District). We’ll look for issues on which we find common ground so we study and share with each other the unique profiles of our members of Congress so when we meet with them in DC, we maximize our effectiveness and improve our chances of making a difference.

“And we don’t assume anything about anyone,” Abbas said. “We look to see if we can find someone who is a personal friend or who went to college with that member of Congress and talk to that person to understand how the congress person thinks or how much risk they are willing to take.”

It is in building relationships, meticulous research on topics, and frequent meetings and phone calls with legislators that produces “victories” for MPP.  It is within that framework that brings change from a representative or senator. Both women pointed to the work done with Sen. Klobuchar’s office that helped her to change positions on cluster bombs. Or MPP’s organized efforts from members calling Rep. Paulsen’s office to protest his scheduled AIPAC-sponsored trip to Israel three years ago. “We’re convinced that the calling alerted Paulsen to an interest level in his district that was greater than he thought,” Abbas said.

“We tell people we know we’ve made significant changes because action does result from our work,” she continued. “Just look at the opposition to U.S. intervention in Syria. Our efforts joined with others and citizens rose up in high numbers to oppose military intervention. There were peace advocates in Congressman (Tim) Walz’ district that said it was hopeless to get him to oppose a military response. But we recruited a retired Mayo physician and his wife to talk to Walz. At first he was ambivalent; he wasn’t sure in which direction he would go. But we told him (through his staff) that people in his district were war weary and wanted financial resources to go into infrastructure projects here at home.

“We encouraged him to go out into his district and in one town he had 100 people lined up to talk to him. And everyone of them—100 percent of 100—said “no” to war in Syria.  We feel as though we helped convince him that he needed to talk to his own constituents and once he did, his mind was changed.”

Legislative staffs and other national peace organizations have praised the efforts of MPP, with one saying, “I cited the Minnesota Peace Project yesterday to a demanding constituent group as an example of how effective a constituent group could be. MPP listens, speaks respectfully, and brings something of value to meetings.”

In addition to the multitude of tasks for 2014— ranging from fund raising, to strengthening social media to district team leadership training—MPP stands ready to help other states build a similar organization to work with their congressional delegations. “I talk to people as I travel and try to plant the idea,” Thomson said. “We’re working on formalizing procedures, building templates, documenting how we started the organization, and what we’ve learned and what’s been successful.”

Key among the lessons learned, according to Thomson, include: