They’re Back: Those Wonderful People In Wisconsin Who Will Not Give Up

So, did you think they had forgotten? Did you think those incredible Wisconsin citizens had disappeared once they delivered their more than one million signatures to recall Governor Scott Walker in January? Were you a tad fearful that maybe the enthusiasm had waned? 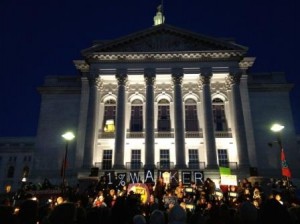 This past weekend, rallies and vigils held in Madison should help alleviate some of that for you.  There they were again, in the tens of thousands to rally on the anniversary of the day Scott Walker obliterated Wisconsin tradition and struck down collective bargaining for public employees. One who attended the Friday night vigil and the Saturday rally in glorious spring-like weather described the weekend activities as “hopeful, uplifting and concentrated on looking forward.”

The “forward” appears to be June 12, the likely date selected for the recall election with primary elections scheduled for May.  Obstacles remain because of the voter suppression laws passed in Wisconsin. There is more out-of-state money flowing in to support Scott Walker than many can imagine. And yet, the people of Wisconsin will not be deterred.  They remain, as they were a year ago, an inspiration for all of us.

John Nichols has done his usual outstanding job of reporting on the weekend activities and Pat Nash writes a great piece in the Baraboo (Wisconsin) News Republic refuting any argument for those who still support Walker.  She concludes by saying:

… the governor continues to claim his policies are working. Anyone who does the research knows this isn’t true. Yet some still cling to the myths and distortions that Walker and his media advisers publish as facts.

There are millions of out-of-state dollars supporting Walker. Those dollars pay for, among other things, advertising that perpetuates these myths — myths that many people continue to believe.

What can we do? For a start, we can take responsibility and educate ourselves so we’re able to determine the difference between facts and press releases that are meant to deceive us. That’s not easy. But unless we make an effort, we’re destined to be governed by those who work for interests other than our own. 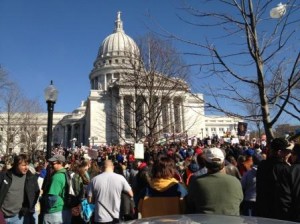 Saturday brought tens of thousands back to Madison.

Forward: Wisconsin’s state motto. It’s the only way we can go. We, as a country, will remain forever indebted to those in Wisconsin for lighting the spark and starting our way out of the darkness that has prevailed for so long in this country.

This entry was posted in Democracy, Labor, Wisconsin Politics and tagged American Labor Movement, Grassroots Democray, Scott Walker, This Is What Democracy Looks Like, We The People, Wisconsin demonstrations, Wisconsin recall elections. Bookmark the permalink.