The Walker Recall: A Win For Democracy And Robert LaFollette

I decided to drive from Minneapolis to Madison Tuesday to see for myself what the volunteers from United Wisconsin had really engineered with the Recall Walker efforts they began nearly a year ago. By Tuesday, it had become obvious more than the 540,000 signatures were garnered.  The question remained how many more and just how electric would Madison be on announcement day.  The forecast of snow showers couldn’t stop me.

The trip did not disappoint. As I stood in the midst of the more than 3,000 people gathered in the main meeting hall of Monona Terrace, it became obvious what the real story was.

I was treated to an incredible display of participatory democracy, grassroots organizing and individual citizen involvement at its best. Democracy is not dead.  It may have fallen asleep in the last

The Walker Recall: A Cheesehead Looking Forward (the state motto)

30 years, but the alarm clock has sounded. Yes, Wisconsin Gov. Scott Walker will face a recall election, but even louder and stronger came the resonating sound that democracy is alive and breathing and has a chance for revival.

Before the official celebration began I talked with Bob Christofferson, who traveled from his home near Poynette to be part of the festivities.  He offered up the following:  What if there had not been a recall option open to Wisconsin citizens?

He recalled the deep anger that had risen in the early days of last February’s protests after Walker announced his union-busting legislation.  Then there was serious talk of a general strike.  Instead, the departure of the 14 Democratic state senators that denied a legislative quorum slowed the process down long enough for the talk of recall to enter the conversation.

Recall.  The incredible foresight of Wisconsin’s greatest progressive leader Robert M. (Fighting Bob) LaFollette had given Wisconsin citizens an option to stop the radical Walker agenda through a democratic, grass roots process that put power back in the hands of the citizens.  He was instrumental in getting the recall process amended into the state constitution in 1914.

Christofferson wondered:  “Without a recall process what would have happened?  Would teachers have left the classroom?  Would Teamsters have protested by driving two miles an hour down the highway?  Would a general strike have been called?”

Instead, he noted, the citizens of Wisconsin turned their anger into “The Wisconsin Way.”  Civility, dignity and respect were brought back into the conversation. A Citizens Movement was resurrected in honor of Fighting Bob.  It resulted in more than 1.9 millions signatures gathered for the recall of Walker, the lieutenant governor and four republican state senators.

Wisconsin native and national news correspondent John Nichols brought the crowd to a frenzy when he recalled LaFollette and his fight against the corporate robber barons of the late 19th and early 20th century. Nichols reminded the audience of their deep progressive roots, which were born in the rural communities over a century ago.  And, Nichols noted, it was the rural counties of Wisconsin which came through with volumes of signatures for the recall of Scott Walker. 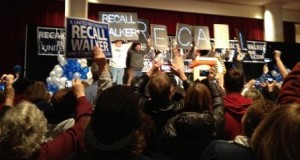 Tuesday night they came from Oconto, River Falls, West Bend, Appleton, Oshkosh, Rhinelander, Burlington and Darlington.  For those not familiar with a Wisconsin map, I suggest you get one out and find those cities and towns.  One million signatures are not all Democrats, they are not all union members and they are not all Milwaukee and Madison signatures.

Nichols quoted liberally from LaFollette, including the following:

“The recall enables the people to dismiss from public service those representatives who dishonor their commissions by betraying the public interest. These measures will prove so effective a check against unworthy representatives that it will rarely be found necessary to invoke them.”

To suggest that this recall effort was somehow driven by out-of-state influence or money, which is the right-wing talking point, is absurd.  It discredits the individual citizens who reclaimed their voices and the democratic process.  To a person, those I talked with Tuesday night expressed frustration with Walker that went far deeper than unions.

The cuts to education were high on the list from a Watertown man decked out in a cheesehead adorned with the state motto, Forward.  “I don’t belong to a union,” he said.  “But my mom was a lunch room helper in a public school and my younger sister was thinking about becoming a teacher until now.” 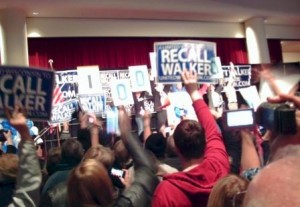 They came from every town and city in the state

Others mentioned cuts to healthcare and yet others the no-bid contracts that went into place under Walker.  “What kind of money are we saving with no-bid contracts?” someone wondered.  “He’s taken money out of the hands of working class people.  They have less money to spend dining out, buying things.  And jobs are lost,” said yet another.

“Never Before,” one of the speakers boomed… “has a Wisconsin governor so compromised the economy of this state by slashing education and health care.”

“Never Again,” the crowd roared back.

The people of Wisconsin may have fallen asleep with the 2010 elections, but they woke up with a vengeance.  The question is, will the nation wake up and reclaim democracy over corporate control?

A Citizens Movement to combat Citizens United.  It remains our last great hope for our democracy.  It is the means for taking on corporate influence, special interest, money as speech.  If we as individual citizens do not unite in a national citizens movement to beat back the power of corporate control in our government, then our democracy will be lost and the prophetic words of Fighting Bob will have fallen on deaf ears.

There were no deaf ears in Madison on Tuesday. We as a nation need to follow Wisconsin’s example.